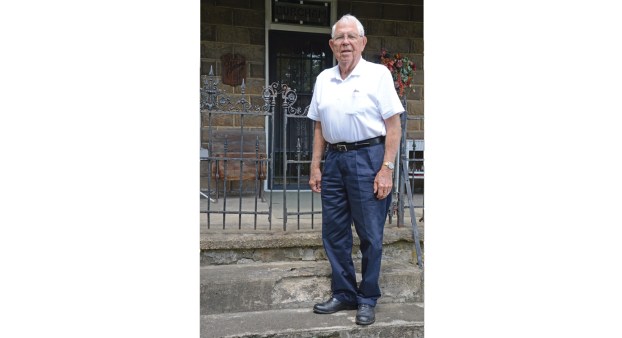 Dale Burcham, 90, retired from Proctorville’s village council at their June meeting. With his resignation, Burcham, the former Lawrence County Clerk of Courts, brings to a close more than six decades of public service. (The Ironton Tribune | Heath Harrison) 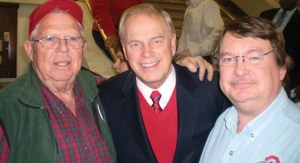 PROCTORVILLE — When Dale Burcham retired from Proctorville’s village council on July 1, it brought to a close not just 24 years of service to the village, but more than 60 years in public life.

In addition to his time on council, for which he has served as president, Burcham has also served as village clerk and mayor and was the clerk of courts for Lawrence County for more than three decades.

Dunfee, now in his third term, said the two have worked together for about ten years. Dunfee followed Burcham as mayor, after he served a short stint in the position following the previous mayor’s death.

“He had his heart in the village and had great ideas,” Dunfee said. “And he was a historian, as far as the village goes. He spoke out when he was right and he was good person to work with and very reasonable.”

Burcham announced his retirement at the council’s June meeting and left office on July 1.

The son of Clarence “Honey” and Bessie Burcham, he was born on Greasy Ridge, the youngest of his siblings, with five brothers serving in World War II.

Not given a middle name, Burcham jokes that, as it was the Great Depression, his family could not afford one for him.

Upon graduation at 17, he entered the U.S. Air Force, serving in the Korean War era, and, upon his discharge, was elected as Proctorville’s village clerk in 1953.

Burcham says he has lived in the same home in Proctorville for 67 years, and points out that his first wife, Betty, grew up next door.

“So all she had to do was walk across the yard,” he said.

The two were married for 65 years and, after being widowed, he recently married his second wife, Brenda.

“I’ve been blessed with two wonderful women,” he said. “I’ve had a good life.”

He said, altogether, he has a family of 42, counting children, grandchildren and great-grandchildren, with all but one living within an hour of him.

“And everyone works,” he said. “Not many can say that.”

His son, Stephen Dale, serves as Lawrence County treasurer and will be wrapping up three terms in September.

When asked what he will miss most about public life, his answer comes quick.

“Helping people,” he said. “It’s what public officials should do. Don’t forget who put you there.”

Burcham says he still hears from the many people over the years who said he helped them with an issue, either at the village or county level. So many, in fact, that he says he often has to be refreshed on the stories. 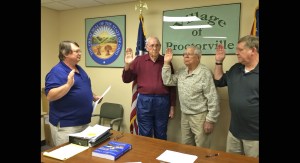 Burcham’s 24 years in office in Proctorville was split by his decades serving as clerk of courts, elected in 1969 on his 39th birthday.

He said when he arrived at the courthouse, it was not air conditioned and did not have curtains on the windows.

One of his biggest accomplishments there, he said, was modernizing the clerk’s office, going from manual typewriters, to electric typewriters and then to computers.

He recalls first using a computer on the job and having his resistance to the change quickly fade.

“I said, ‘I’ve got to have one of these. It will do everything but cook you breakfast,’” he said.

He cited as two of the accomplishments he is most proud of helping to establish Lawrence County’s 911 and purchasing the historic Burlington jail building for the county.

Burcham also worked as a volunteer in the White House in the 1990s, under President Bill Clinton.

“Not many kids from Greasy Ridge without a seat in their britches got to do something like that,” he said.

When asked what has changed most about public service since he began, Burcham said the increased hostility and partisanship.

“There’s too much of that on both sides,” he said.

One of those who worked longest with Burcham was former Lawrence County Common Pleas Judge Dick Walton, who served from 1981-2005 in that position.

Walton, a Republican, said he “got along famously” with Burcham, a staunch Democrat.

Walton said he first met Burcham when he was practicing law in 1967 and also knew him from his time as assistant prosecutor for the county.

“He was a man of his word and never too busy to take the time help solve problems for everyone,” he said. “And he tried to work for all the people.”

He said always ran a good office as clerk.

“He had very low turnover in personnel,” Walton said.

Walton, who said he was distantly related to Burcham’s first wife, also spoke of Burcham’s love of Marshall University and recalled a time they each went to a game with Ohio State, whom Walton supported.

“We ended up running into each other at the same gas station on the way to Columbus,” Walton said.

He said Burcham in addition to athletics, Burcham was a supporter of academics and “believed in education.”

Fairland West Elementary School assistant principal Sandy Joseph, whose school serves Proctorville, said those in the eastern part of the county could always rely on Burcham to help them get paperwork and forms to the courthouse in Ironton.

She said he has always been a friend to the community.

“And they are just a wonderful family,” she said.

“He was the man for the job and did it, regardless of politics,” he said.

While he is retiring from council, Burcham said he will remain active in the community. He still serves on three boards: the Briggs-Lawrence County Public Library System, the Chesapeake Community Action Organization and Citizens Bank.

He also spoke of his plans for the future.