End of recruiting pause has football programs catching up 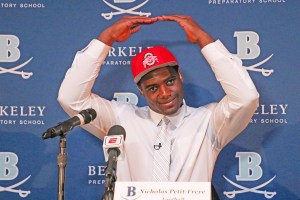 Nicholas Petit-Frere signed with Ohio State as a five-star recruit out of Tampa’s Berkeley Prep.

Minnesota’s P.J. Fleck spoke for many coaches nationwide last December when he noted he still hadn’t shaken the hands of about half the prospects who were about to sign with his program.
Those days finally are coming to an end.
The NCAA has lifted the recruiting dead period that has been in place since March 13, 2020, due to the coronavirus pandemic. The NCAA returned to its usual recruiting calendar Tuesday, allowing prospects to meet coaches in person and coaches to conduct live evaluations of recruits.
That means programs across the country are going to make up for lost time.
“It’s going to be crazy,” South Carolina coach Shane Beamer said.
The change is a relief for high school football players such as Max Reese, a wide receiver from Fenwick High School in the Chicago suburbs. Reese has offers from Bowling Green and Northern Illinois, and he has visited both Mid-American Conference schools. But he couldn’t meet the coaching staffs at either program during his visits because of pandemic-imposed restrictions.
Now he finally gets to speak face to face with the coaches who have been Zooming with him for the last year. That should give both the prospect and the staff a better idea of their interest in each other.
“It’s like dating a girl online,” Reese said. “You don’t know what you’re really getting until you see them in person.”
Ohio State assistant athletic director for player personnel Mark Pantoni uses a different analogy as he discussed how tough it has been for prospects to evaluate schools based on virtual campus tours.
“It’s cool when you see the commercial of the nice flashy car, but you don’t really know until you test drive it how cool it really is,” Pantoni said. “That’s what we’re about to do. These kids are about to test-drive the car finally after seeing the commercial for so many months.”
College staffs have been gearing up for this moment.
Florida State was welcoming recruits to campus just after midnight as part of its “Midnight Madness” event to mark the end of the dead period.
At Ohio State, director of campus recruiting Erin Dunston said the Buckeyes have 51 official visits scheduled for June. Pantoni said Ohio State’s yearly total of official visits normally is in the “high 40s to low 50s.”
“So this is pretty extraordinary, but not unexpected either,” Pantoni said.
This month is particularly important for players in states such as California and Illinois, which didn’t have traditional fall seasons and instead played abbreviated schedules in the spring. Prospects in states without fall seasons generally didn’t get as many opportunities to show what they can do on tape.
“The advice I’m giving my people is to go to as many camps as they can and get as much exposure in front of as many people as they can,” said Jon Ellinghouse, the coach at Sierra Canyon School in Carlsbad, California.
Ellinghouse said the pandemic-imposed restrictions haven’t been particularly costly for players such as Sierra Canyon safety Kamari Ramsey, who is rated as the nation’s No. 107 overall 2022 prospect, according to composite rankings of recruiting sites compiled by 247Sports.
The players who’ve been hurt the most, according to Ellinghouse, are the potential late bloomers or lower-tier prospects who needed the exposure they could have received from camps or spring evaluations.
Yet even the top recruits are welcoming the long-awaited opportunity to visit the schools they’re considering, though the virtual tours offered by schools have proved beneficial.
College coaches have said they would like to continue offering Zoom tours of campuses to prospects even in a post-pandemic world. As it became apparent the dead period would last longer than just a few months, football staffs got creative and made these tours increasingly sophisticated.
“It’s hard to know how long a person could stay on Zoom, particularly in the front end of the (pandemic),” Missouri recruiting coordinator Casey Woods said.
“Nobody knew what your attention span was, so we were building visits kind of in two or three parts. (We’d say), ‘Hey, we’ll talk from 1 to 2 on this, take a lunch break and come back and meet from 3-4 on this or whatever.’ Once we realized all of our tolerance for being on those things, we realized what we could get done.”
But no virtual presentation could compare with the real thing. Washington State recruiting coordinator John Richardson acknowledged how difficult it was this past year to see prospects sign with schools they’d never gotten a chance to visit in person.
“It’s just like you’re taking a job somewhere and you have no idea what it looks like, what’s around, anything like that,” Richardson said.
Now they will have a better idea of exactly what to expect.

CLEVELAND (AP) — Indians ace Shane Bieber had been bothered by irritation in his right shoulder for most of the... read more