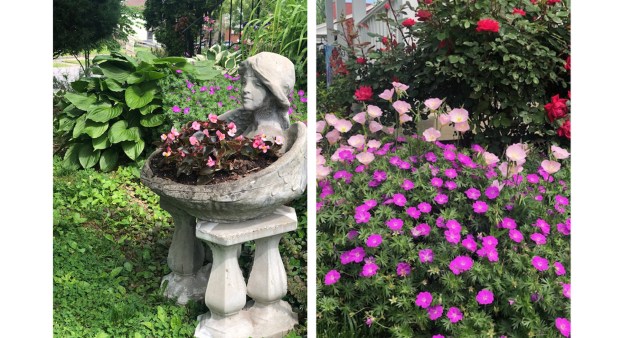 Above are some sneak peeks of three of the gardens on this year’s Ironton In Bloom’s annual Over the Backyard Fence tour on June 20. There will be seven stops on the tour. (Submitted photos)

Touring the gardens of Ironton

Instead of just taking a peek at a beautiful garden while out on a walk, people will be able to take Ironton In Bloom’s annual Over the Backyard Fence tour on June 20 and get a good look at what their neighbors have done to beautify their space.

This year’s tour starts at the Lawrence County Historical Museum and will tour seven yards as well as the Memorial Park, which is on the property of the old Memorial Hall building on the corner of Fourth and Railroad streets, across from the Ironton Post Office.

Christy Phillips, a member of Ironton In Bloom, said that they began beautify the property about six years ago by planting two trees and then putting in some outdoor exercise equipment with money from a Foundation for the Tri-State grant.

Even parts of the old building were used for decorative purposes.

“They used the old jail house doors to make trellises and stones from the original building as benches, which I thought was really interesting,” she said. “There’s also a fountain and every year we try to add a little more to it. I see it used quite a bit with people sitting there and enjoying the shade. It’s such a nice green space, it is a beautiful addition to the downtown.”

As for the other stops on the tour, those are semi-secret until you buy a ticket and get a detailed map and have a refreshment before heading out.

“I can’t give out the addresses,” Phillips said. “We have eight locations. You can start at any location you want. And we have Weymouth Hill on the tour this year and it is just beautiful.”

When pressed for any more details about the gardens, Phillips was rather mum on the details.

“We have a couple of very unique backyards on the tour this year,” she said. “They will be very unexpected and I don’t want to give too much away, but I will say, maybe Caribbean resort. When I went to visit, I was amazed at the size of the yard and just how much work and creativity people have put into it.”

The Over the Backyard Fence tour will be 1–4 p.m. and there are seven stops on the tour. Cost is $12. Rain date is 1–4 p.m. June 27. Tickets available to purchase from members of Ironton In Bloom via Facebook or direct message or by stopping by the Lawrence County Historical Museum, 506 S. Sixth St., Unger’s Shoe Store, 304 S. Third St. or Merle Norman, 221 S. Third St.

The tour spots will be marked with balloons and an Ironton In Bloom member will be there as well to answer any questions.

“We would love to have as many people as possible take the tour just to show off these backyards and to see what is possible and to get ideas and hopefully, get more people to join Ironton In Bloom,” Phillips said.

The tour is a major fundraiser for Ironton In Bloom, which uses the proceeds for a number of beautification projects around Ironton including planters, hanging baskets, trees and bushes.

A group of Symmes Valley High School students is being honored by Project First Impression for their art project that... read more