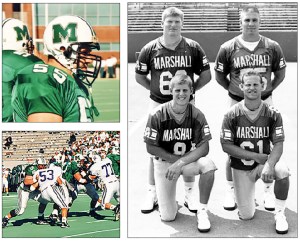 When the news came on Friday morning, it was unquestionably a surprise, even a little shocking.
The word spread quickly that young 49-year-old J.D. Cyrus had died of an apparent heart attack.
Immediately there was an outpouring showing of sympathy for the family, especially his mother Sharon Wylie Price, his father Dave Cyrus and brother Josh Bator.
The Ironton community and more so the Fighting Tigers’ football family had lost a former great player. J.D. was one of the best linemen to play at Ironton and formed a formidable tandem along with J.D. Coffman as they lined up at guard and tackle for the 1989 Division 3 state championship team.
Both Cyrus and Coffman signed with Marshall but tragedy hit Coffman in his freshman season as a rare staph infection claimed his life at the age of 19. Cyrus went on to start at center for the Thundering Herd and was an all-conference selection and was a starter for the 1992 NCAA 1-AA national championship team.
J.D. Cyrus was a great football player, but that’s not who he was. Being a good football player was something that J.D. did.
I have covered a lot of players throughout my career and I’ve known the players and the families, some ever more than others. J.D.’s grandfather Jay Wylie lived on the corner near my father-in-law and it was hard not to see him out working in his yard. Jay Wylie loved all his grandchildren but he always referred to J.D. as “number one grandson.” His pride in J.D. nearly exploded from his chest.
J.D. had a great smile and he flashed it all the time. He was kind to everyone but he was one tough individual. He loved playing football. He also loved being ornery.
Ironton fullback Heath Brownstead was J.D.’s cousin. Now, Cyrus and Coffman were able to dominate most opposing defensive linemen and Cyrus knew it wasn’t a problem to open a hole for Brownstead. The thing Heath had to worry about was those linebackers or defensive backs coming up too quickly to try and stop him.
Brownstead was one of the best fullbacks Ironton has had during the past 50 years and even when a player knew he was coming, there was a lot of punishment dished out when making the tackle. Cyrus loved coming to line of scrimmage and tell the defense that they were running the fullback in the hole between him and Coffman.
Brownstead would tell Cyrus to stop it and J.D. would just laugh.
No matter what J.D. had in his plans, when his mom Sharon spoke, he listened. No one loved their mother any more than J.D.
It was easy to talk with J.D. He loved being around people and engaging in conversation. And the big thing was his ability to listen more than he would say. He was laid back but strong and tough.
J.D. was no different than any of us. He wasn’t on a path to sainthood, but he was on the path to help others if possible.
J.D. Cyrus will be remembered by many as a great football player. In my memory book, those accomplishments will be in later chapters. There’s a lot of other things I’ll remember first.
—————
Jim Walker is sports editor emeritus of The Ironton Tribune.