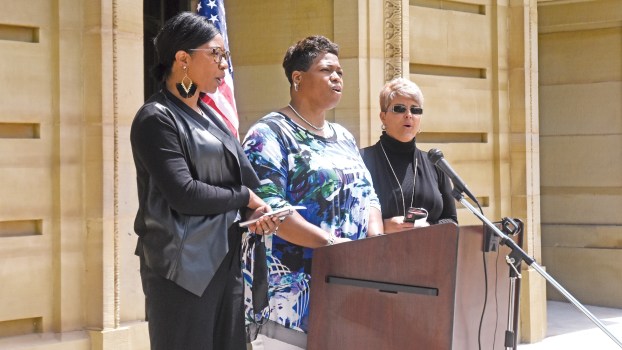 Kristen Marten, Coretta Phares and Katrina Keith sing “God Bless America” during the National Day of Prayer event held on the steps of the Lawrence County Courthouse on Thursday. (The Ironton Tribune|Mark Shaffer)

As is the tradition, on Thursday, local ministers from the Ironton Area Ministerial Association gathered on the steps of the Lawrence County Courthouse to celebrate the National Day of Prayer and to pray for America as they have for the past five decades.

This year, over 50 people attended the event.

This year’s keynote speaker was Dr. Terry Johnson, a Portsmouth osteopathic doctor who served in the Ohio House of Representatives for the 90th District from 2011–2018.

He said as people of faith, we know that there has been a spiritual war that has been going on since God created the world and it won’t end until the return of Jesus. He said that generations have known this.

“We are at a critical point as Americans as we are being told where God belongs and where he doesn’t belong,” he said. “As Christians, we have a guidebook of how to live our life, how to teach our children and how to conduct ourselves. It’s the Holy Bible. It’s all there.”

He said we know we have problems and that on social media and television there are powerful, well-funded forces that are trying to tear us apart and that we shouldn’t lose love of our neighbor.

“We have almost nothing bringing us together as a nation,” Johnson said.

He said he was driving home the other day and he saw a political sign, which seemed a little out of place since there aren’t any political races happening right now. But rather than a sign promoting a candidate, it read “Jesus 2021.”

“There is something we can rally around,” Johnson said.

Lawrence County Commissioners’ administrative assistant Katrina Keith, a minister with the Church of the King, prayed for the family.

“Family is the foundation upon which our future is established,” she said. “I pray that you put a hedge of protection around us, keep us safe, O’ heavenly father, to seek after you and that we would grow strong families here in Lawrence County.”

David Amos, pastor of Impact Church, prayed for the churches.

“What a great honor to ask God to bless the church of Jesus Christ here in our city, our nation and around the world,” he said.

First Church of the Nazarene pastor Rob Hale prayed for the workplace.

“Why is praying for the workplace so important? Because we need workers in the workplace, don’t we?” he asked. “Lord, we call upon you and pray for the men and women who get up every morning before a lot of people get up, even before the chickens get up, and go to work.”

Lenny Campbell, pastor of Oakland Chapel, prayed for those in the education field.

Terry Jones, pastor of Resurrection Hope UMC and president of the Ironton Area Ministerial Association, prayed for the government and he added first responders since they were reminded of them as an ambulance went past the courthouse a few minutes earlier with its sirens blaring.

“Lord, I ask that you bless everyone who holds an elected chair in this country,” he said. “That you would give them the wisdom and knowledge to turn to you in every decision that they make. That this country can return to a great nation and not the division of all the things that are going on in this country.”

Jeff Cremeans, the pastor of The Ironton City Mission, prayed for those in arts, entertainment and media. He said he knows that the church has had issues with the media over the years, but asked where the church would have been over the past year.

“Where would we be without Facebook services over the past year? A lot of folks wouldn’t have gotten the Gospel to them without it,” he said. “Thank God, the church can take something that the world uses for evil and make something good of it.”

Carson Hunt, pastor of the First Presbyterian Church, prayed for the military.

He pointed out that one of the first things George Washington did when he became president was to order 2,000 Bibles for the army and was well-known for praying for an hour every night.

“Can you imagine a president doing that today?” he asked. “Maybe, they do that now. I don’t know.”

He prayed that the military would place their faith in God and Jesus.

“Faith in prayer, faith in action, faith in victory, righteous victory found in you and your glory, for name’s sake,” he prayed.

The first National Day of Prayer was on July 4, 1952 after it was signed into law by President Harry S. Truman. A young evangelist named Billy Graham was a big part of the push to make it a national event.

Every president since 1952 has signed a National Day of Prayer proclamation. In 1988, the law was unanimously amended by both the House and the Senate and signed into law by President Ronald Reagan designating the first Thursday of May as a day of national prayer.

President Joe Biden issued a proclamation on Wednesday for the National Day of Prayer.

It read, in part, that on “this National Day of Prayer, we unite with purpose and resolve, and recommit ourselves to the core freedoms that helped define and guide our Nation from its earliest days.  We celebrate our incredible good fortune that, as Americans, we can exercise our convictions freely — no matter our faith or beliefs.  Let us find in our prayers, however they are delivered, the determination to overcome adversity, rise above our differences, and come together as one Nation to meet this moment in history.”

Attendees asked to follow guidelines; fireworks planned The holiday is just over three weeks away and the Ironton-Lawrence County Memorial... read more