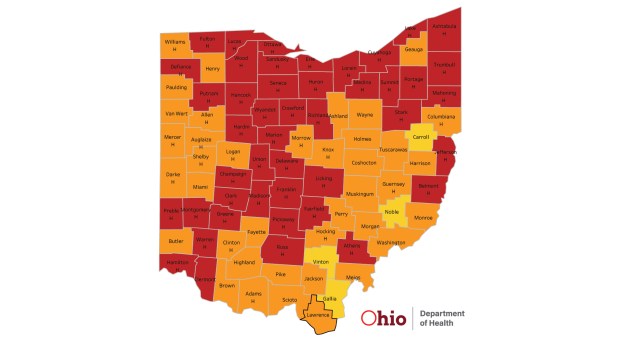 Lawrence County Health Department director Georgia Dillon told county commissioners on Tuesday that cases of COVID-19 are on a rise in the county and urged caution by the public.

“I know everybody is really tired of wearing the masks and everything we have to say, but our numbers are going up we are very cautious,” she said.

Dillon said the county had 30 new cases in the preceding week, including a three-month-old child.

Dillon said that Lawrence County has seen a higher rate of positivity than surrounding Scioto, Jackson and Gallia counties.

She said that, officially, 23.88 percent of county residents have at least started a vaccine for COVID-19.

Dillon said these numbers are according to what has been administered within the county and does not account for pharmacies, hospitals and health providers in West Virginia or Kentucky.

She said she estimates the percentage vaccinated is closer to one-third of residents.

Dillon also said that the temporary pause on the Johnson & Johnson vaccine has been lifted and can be administered in the county again.

“But we don’t know the availability and when we’ll have that,” she said.

Dillon concluded by speaking of the latest health ranking of Ohio’s counties from the Robert Wood Foundation from the University of Wisconsin.

She said in past years Lawrence County has ranked 87th out of Ohio’s 88 counties. In this year’s numbers, the county was ranked 82nd.

She said this study looks at behaviors, as well as obesity, lack of exercise and transmittable disease, all of which she said were preventable.

“Maybe we can all work together to try to increase healthy behaviors,” Dillon said.

Commission President DeAnna Holliday responded to the numbers on vaccinations.

“We have more work to do,” she said. “We’re doing well, and want to encourage people get out and get vaccinated as soon as possible.”

In commissioners’ reports, Holliday said that the 153rd Ironton-Lawrence County Memorial Day Parade is set to take place and parade officials are working on specifics.

“Meeting with the health department this week to determine what crowds will look like and what all the details will be,” she said. “But you can be assured the parade will happen this year.”

Holliday also acknowledged the news that Purecycle would be expanding and establishing their headquarters in the county.

“We’re very glad they will be calling Lawrence County home and we look forward to that partnership,” she said.

In other business, the commission:

• Heard from Lawrence County Sheriff Jeff Lawless, who said new cruisers will be on the road soon.

“We’re waiting on radio equipment right now, and we are still appreciative of that,” he said of the purchase of the vehicles.

• Approved and adopted the concealed weapons, weapons and firearms policy approved by the Lawrence County Prosecutor.

• Approved and adopted the workplace conduct and violence policy approved by the Lawrence County Prosecutor.

• Met in three executive sessions on personnel and legal contract matters, with no action taken.

It was four months ago that the Lawrence County Spelling Bee was called off from its usual December date, due... read more