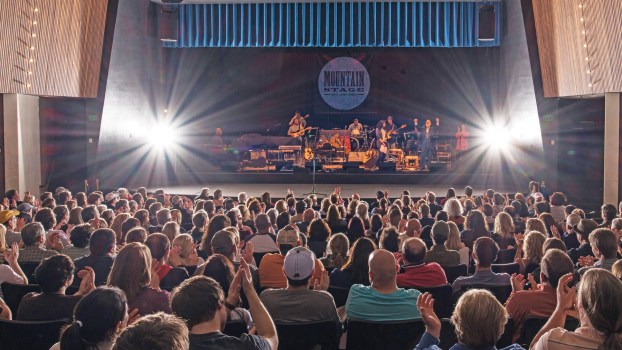 Larry Groce and the Mountain Stage Band perform at the Culture Center Theater in this file photo. Mountain Stage will commemorate the 150th anniversary of the City of Huntington with a special show on April 16, 2021 at Joan C. Edwards Stadium. (Josh Saul | Courtesy of Mountain Stage)

HUNTINGTON, W.Va. — In 2021, Huntington is turning 150 years old, and one event will bring its own blend of Appalachian spirit to our area.

The NPR international live radio program Mountain Stage, in conjunction with Marshall Artists Series and the City of Huntington, will host a sesquicentennial-themed concert AT 7:30 P.M. on Friday, April 16, 2021. This rain-or-shine event will take place at Joan C. Edwards Stadium, and all local, state and federal safety guidelines will be followed. nSocial distancing and mask use will be required.

General admission tickets are $60, with fees and taxes included in the price. Tickets will be available to the general public in early 2021, and performing artists will be announced at a later date.

This event is in memory of Frank E. Hanshaw, Jr. and is sponsored by Mountain Health Network and AT&T, in addition to WSAZ Newschannel 3, iHeartMedia and The Herald-Dispatch.

“We are thrilled to partner with Mountain Stage and the Marshall Artists Series as we celebrate a benchmark year in our community’s history,” Mayor Steve Williams said. “Mountain Stage has always delivered a quality product that features musical performers who reflect our innovative and imaginative spirit in West Virginia and especially here in Huntington. There will be no better time for Huntington to be cast in the world spotlight than during our 150th anniversary year.”

For more than 30 years, Mountain Stage has been the home of live music on public radio. Hosted by Larry Groce, the program is produced in West Virginia and distributed worldwide by NPR. Mountain Stage features performances from seasoned legends and emerging stars from around the world in genres ranging from folk and blues to indie rock, synth pop, world music and beyond.
April’s show, which will be a rare outdoor show for the program, is the first live Mountain Stage with an audience since the pandemic began. The show was forced to cancel several shows in the spring due to limits on mass gatherings.

In the meantime, they have broadcast archive shows, followed by three shows, without an audience, that were livestreamed. Viewers were asked to do a pay-as-you-want ticket to help sustain the program.

Artists for the Huntington show will be announced in early 2021.

The community is invited to get involved in Huntington’s 150th Anniversary in other ways as well:

Use our ​collections of templates​ to get started and add the sesquicentennial theme to your in-person or virtual events. If you’re not hosting an event, celebrate by attending one.

If you’re a small business, larger organization or part of another sector, be a year-long sponsor of activities. Different levels and perks of being a sponsor are offered — besides being part of history.

Whether you remember bygone days or are a new transplant to The Jewel City, The City of Huntington wants to hear from you. They are now collecting stories from community members to commemorate Huntington’s vibrant history and to showcase why residents love Huntington. They are seeking 50 stories, in both written and video formats for our time capsule, social media posts and other storytelling methods in 2021 for their 150 stories.

Starting in 2021, they will choose one story to release per week, and a total of 50 stories will also be an integral part of their initiative capsule. Submit your story at www.cityofhuntington.com/huntington150.

They are currently offering a commemorative, limited edition collection of Blenko products, including water vases and sundials. Visit The Red Caboose in person or online at www.shoptheredcaboosewv.com.

You can contribute financially to the ​150th Anniversary Fund or volunteer for a 150-sponsored or partner event, whether it’s a city cleanup or helping at a signature Huntington event.