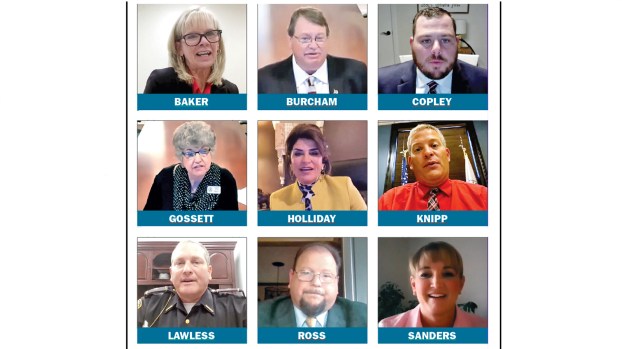 On Tuesday, local candidates were part of a virtual forum to inform Lawrence County voters what their stands were on issues related to the office they are seeking.

The forum has held by the Lawrence County Chamber of Commerce, Armstrong and The Ironton Tribune. The event was held virtually because of social distancing issues.

Chamber president Katie McKnight welcomed the candidates and explained the chamber has traditionally hosted a forum for only state races but, because of the pandemic, they decided to expand and cover the local races since they already had a virtual conference space available.

Sarah Simmons, general manager of The Ironton Tribune and a Chamber board member, was the moderator for the evening.

The races covered in the forum were for the county offices of sheriff, recorder, treasurer, auditor and juvenile/probate judge.

The candidates were given two minutes to introduce themselves.

First up was candidate Paul David Knipp, the Republican who is currently the Lawrence County incumbent auditor. He was appointed to the position in October 2019 after Jason Stephens was appointed to be the District 93 Ohio House Representative. Previous to becoming the auditor, Knipp was on the Rock Hill School Board for nearly a decade. He was also a practicing attorney and was an assistant prosecutor for Jackson County. His Democratic opponent is Jason Tolliver.

Next up was Lawrence County Commissioner Colton Copley. He is also an emergency room physician at Cabell Huntington Hospital. Independent candidate Doug Malone is running against him.

Then it was Lawrence County Commissioner Deanna Holliday, who is the president of the commission. She is also the owner of several businesses. Her Democratic opponent is Jeffrey Blakeman.

Lawrence County Juvenile/Probate Judge Patricia Sanders was next. She was appointed by Ohio Gov. Mike DeWine to fill the unexpired term of Judge David Payne after he retired last year. She was a juvenile court magistrate under Payne for 17 years and has been a practicing attorney for 24 years. She is running unopposed.

She said this forum was a little emotional for her, as this was her last opportunity to speak at the forum as a candidate as she will not be running for office again.

“Musicians speak of their farewell tours,” she said. “Well, this is going to be my farewell term.”

She was appointed to the office in January 2004 by the Republican Central Committee to fill the term of Sue Deeds.

Next up was Lawrence County Sheriff Jeff Lawless. He was first elected to the office in 2008 and has been in the law enforcement field for 34 years after he began as a corrections officer under Sheriff Dan Hieronimus.

Next was his opponent for the sheriff’s office, Ironton Police detective Capt. Joe Ross. He has been with the IPD since 1996 and has been the lead detective for the past six years.

Next was Tresa Baker who is running for Lawrence County treasurer. This is her first time running for office. She has been a certified public accountant since 2006. She has spent three decades as a school treasurer with the Fairland and South Point school districts and has dealt with multimillion dollar budgets.

Lawrence County Treasurer Stephen Dale Burcham was next. He has been in the office since he was elected in 2004. He has been a certified public accountant for 36 years. He also runs the county land bank.

Simmons asked the candidates for commissioner how they would rate the response to the COVID-19 pandemic locally and what can be done moving forward.

Holliday said that Lawrence County’s response was very similar to what was done across the country. She said they immediately identified what the needs were going to be for the county and knew that every county in Ohio and every state across the nation was going to have unique needs.

“First and foremost, our concern was the safety and well-being of our citizens,” she said, adding that one of the first things was securing personal protective equipment. “The reality is that it was an invisible enemy we were faced with, it was uncharted waters, a very fluid situation that we work through daily.  So, I think Lawrence County’s response was quick, it was deliberate and we will continue to take those same actions and measures moving forward. We are in a good position with better understanding.”

Copley said he was very proud of the county’s response to the pandemic and that they formed a strong team with Lawrence County Emergency Management Agency, EMS crews, the Lawrence County Health Department and many others. He said they met daily to discuss things like PPE needs and to prioritize the health needs of the county.

“I think through that, we were able to come up with a lot of solutions and leadership to not only businesses, but the citizens of the county,” he said. “I was proud, with my medical background, to give some insight to that team. And I think through our collaboration and teamwork, we will continue to make decisions that will keep our citizens safe and to help our businesses recover from what has been the unprecedented effects of COVID.”

The sheriff and treasurer candidates were asked what skill differentiated them from their opponent and made them the right person for the job.

Baker said it was her proven experience with managing budgets and the fundamentals of cash management, which she said is one of the key things to the position of treasurer.

“I’ve spent 30 years as a school treasurer. I have had 30 audits and have had no findings for recovery. I have received awards for financial reporting and I have a proven track record,” she said, adding she has assisted when the school districts went through financial crises. “With the current situations and limited resources, it takes somebody who has that proven track record.”

Burcham said one of the things that differentiates and makes him the best candidate for treasurer is his background in business.

“They say that government should be run like a business. I run a business. I advise people in business on all facets of business activity,” he said. “I too have been through a number of audits and I have never had an issue of finding against me or my office in that regard.”

He said his office has been able to reduce tax delinquencies by over 70 percent by applying fair and equal tax collection policies.

Lawless said that being a sheriff is a juggling act with running the jail, keeping deputies on the road, keeping citizens and children safe, among many other aspects.

“It is a very taxing job and takes a lot of experience in order to make this operation work,” he said, adding he has been fiscally responsible with his budget and continues to keep operational a jail that is falling apart. “Frankly, I think my record proves exactly what I am able to do.”

Ross said he spent six years on the Coal Grove Village Council overseeing budgets. He said he helped the village get an impound lot and use the fees associated in the general budget. He leads the IPD drug task force and has never come up short when audited.

“I think there are some things that need to be implemented at the sheriff’s office to bring in some money that the taxpayers aren’t responsible for paying,” Ross said.
Ross said that the biggest issue for the county is the jail.

“The sheriff and his current administration have been in there for the past 12 years and I haven’t seen any plan that has been put into place by that administration,” he said, adding the sheriff’s office spent $1 million last year transporting prisoners to other jails and that money could have been put towards a new facility instead.

Lawless said he has been involved in several plans and that the commissioners and judges have been working on plans since he was the jail administrator and he has “boxes and boxes” of the various jail plans.

“The biggest hurdle for getting Lawrence County a jail is money,” he said. “The tax base in Lawrence County is not very good and you don’t get to go back and tax the citizens to death to try and get this jail going.”

Lawless said he is on a jail committee now and there is a plan but it has to be discussed with the commissioners before anything is released. He said a study for a new jail has already been done.

Copley said that one of the first meetings he had when he took office two years ago was with the sheriff to discuss a jail.

“What we want is to have a shovel-ready project ready, that way when we team up with the state which can provide funds for counties that don’t have the financial ability to build a jail when those funds become available,” he said.

Holliday said it was a very layered task to get a jail built. She said they have had many meetings with officials and they now know what it will cost to build a new jail and have secured property that could be used for the jail.

Hager said the duty of the recorder’s office is to keep accurate records of the land in the county and if they didn’t, “there are whole realms of problems that would create.”
Sanders was asked about balancing being an independent judge and an elected official.

She said considered a matter of character and that her decisions are based on the law and facts.

She said for her, the cases are usually decided by what is in the child’s best interest.

“I am always, always going to do the right thing for the child within the law, regardless of what anyone thinks about my decision,” Sanders said. “Our children are too important, families are too important, to worry about making someone upset.”

The general election is Nov. 3. Early voting has already started in Ohio.