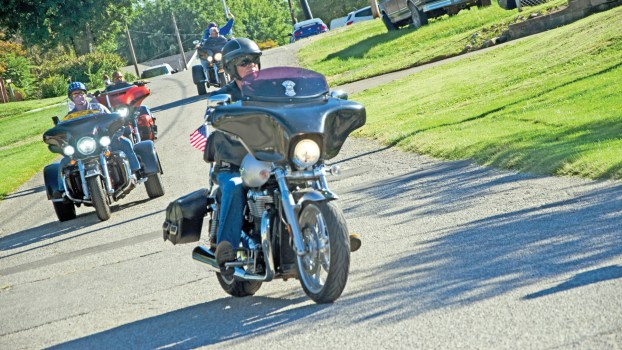 Rolling Thunder bikers parade down Goldcamp Street near the home of Leo Slaughter, of Ironton, on Sunday. The group staged the event to welcome Slaughter home after recuperating from a crash. (The Ironton Tribune | Heath Harrison) 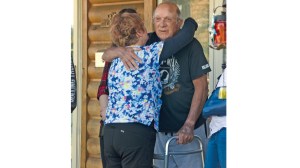 Leo Slaughter gets a hug as family and his fellow member of Rolling Thunder gather at his home in Ironton on Sunday. The group staged an event to welcome him home after recuperating from a crash. (The Ironton Tribune | Heath Harrison)

A normally-quiet neighborhood on Goldcamp Street heard the sound of motorcycles as a parade was staged on Sunday afternoon to welcome home one of its residents.

Leo Slaughter is a member of the Lexington, Kentucky chapter of Rolling Thunder, a group that works to raise awareness of Missing in Action and Prisoner of War causes.

Bill Phelps, a member of the group, said that on Aug. 27 the group was, along with the Patriot Guard, escorting the remains of Cpl. Billie Joe Hash. Hash served in Korea with Headquarters Battery, 57th Field Artillery Battalion and went missing in action and was presumed dead on Dec. 31, 1953. His remains were identified and accounted for earlier this year.

Phelps said the procession was traveling from Hebron to Corbin, Kentucky.

“We were in Hebron and, about a mile off the exit, there was a motorcycle accident,” Phelps said.
Slaughter was taken to the hospital for broken bones and had to undergo surgeries.

Phelps said, due to the COVID-19 pandemic, members were not able to visit him in the hospital.

And, to mark the occasion, about a dozen bikes with members from around the Tri-State came down his street and circled twice around the home.

Slaughter, who is retired from ARMCO, met with the members while on a walker from his porch.

The parade and welcome home was a surprise and Slaughter said he had “no idea” they were coming, but was “tickled” by the show of support.

“They’re good people,” he said of his fellow members, who escorted him to the hospital after the crash.

Rolling Thunder was formed in 1987 and has chapters across the nation. Their stated goal is full accountability for MIA and POWs in all U.S. conflicts. Each year, the organization brings hundreds of thousands of bikers to Washington, D.C. for the annual Run to the Wall event.