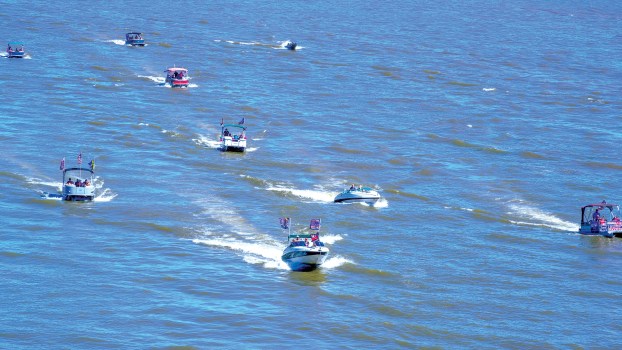 A group of boats heads downstream on the Ohio River from Huntington, as viewed from the Robert C. Byrd Bridge between Chesapeake and Huntington, on Saturday. The rally was organized in support of President Trump. (The Ironton Tribune | Jeremy Holtzapfel)

Rally cruises from Huntington to Ironton 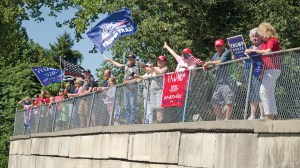 Supporters of President Donald Trump watch a boat rally in support of their candidate from the boat dock in South Point on Saturday. (The Ironton Tribune | Heath Harrison)

SOUTH POINT — Labor Day typically marks the beginning of the fall campaign season and backers of President Donald Trump made their support known on Saturday.

A boat rally in support of the Republican incumbent took place on the Ohio River, beginning in Huntington.

Mike Payne, a supporter of the event, organized a group of a few dozen gathered at the boat dock in South Point, where they were waiting for the vehicles to make their way down the river. A large 5-ton truck, owned by Kent Freeman, was parked at the entrance, decked out in Trump campaign flags.

Across the river, a similar crowd could be seen watching from Virginia Point Park in Kenova, West Virginia at the junction of the Ohio and Big Sandy rivers.

Payne said he could not have been more satisfied with the weather for the day, as well as the turnout, both on the river and the banks.

“I’m telling you, we have a good crowd here,” he said. “And I hear there’s a good crowd up in Huntington. I’m well pleased” 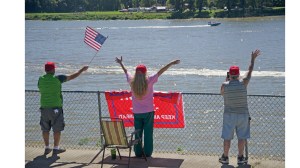 Supporters of President Donald Trump cheer a boat rally in for their candidate at the boat dock in South Point on Saturday. (The Ironton Tribune | Heath Harrison)

The event began about an hour later than originally planned and left Adam’s Landing Marina in Huntington just before 2:30 p.m.

Boats came down individually, in pairs, and clusters of about four, decked out in American flags, and Trump campaign signage and flags.

The procession was large enough that, when the first wave of boats made it to South Point about 15 minutes later, there were still many yet to depart Huntington.

Altogether, it took about an hour for all of the boats to pass.

Some turned around in Ashland, but the final stop on the rally was at the boat dock in Ironton, where some stopped before making the return trip. A sizeable crowd waited, many in lawn chairs, along the riverfront watching there as well.

The three-state boat rally was organized by Stacey Holley, a Chesapeake native, who told The Tribune that participants came from as far away as Gallipolis.

She was inspired by a boat parade organized by Trump supporters in Clearwater, Florida earlier this summer, which had more than 2,000 boats.

Holley said she lost count of how many boats took part in the event, with the number at 186 when they left Huntington, not counting in those who joined later in place like South Point, Burlington, Ashland and Ironton. 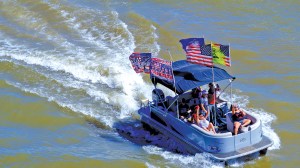 A collection of boats, part of rally in support of President Donald Trump, headed from Huntington to Ironton by way of the Ohio River on Saturday. (The Ironton Tribune | Jeremy Holtzapfel)

She said they were also accompanied by a flyover of planes at the beginning and some participants went from Ironton to Franklin Furnace, where they stayed the night at Holiday Point Marina.

Holley said she planned the event in less than two weeks and was thrilled.

“The weather was perfect and everyone was so nice,” she said. Everybody was on board for Trump and celebrating America. And no one was disruptive.”

While Biden has a lead in national polls at the moment, the story is different here in the Tri-State.

Trump has a comfortable lead in both West Virginia and Kentucky, while Ohio polling shows a dead heat and the Buckeye State is once again a battleground.

The two candidates will face off in the first presidential debate on Tuesday, Sept. 29 and the general election will take place on Nov. 3, with early and mail-in vote beginning in weeks prior.

— For more photos from the event, see the next edition of The Ironton Tribune

Copley: False positives are expected, not widespread At the Tuesday meeting of the Lawrence County Commissioners on Facebook, Lawrence County... read more