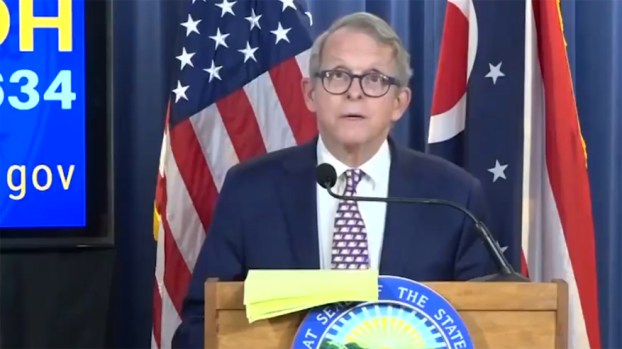 Gov. Mike DeWine speaks at a news conference on the coronavirus. (Submitted photo)

COLUMBUS — Three Republicans in the Ohio House of Representatives have called for the impeachment of Gov. Mike DeWine over health guidelines he has put in place due to the COVID-19 pandemic, but they were swiftly condemned by their party’s state chair.

Cincinnati Rep. John Becker said he has drafted 10 articles of impeachment against the first-term governor in an effort currently backed by three other conservative House lawmakers.

An impeachment website lists Rep. Nino Vitale, a Republican from Urbana and a frequent critic of DeWine and the mask mandate, and Rep. Paul Zeltwanger, a Republican from Mason in southwestern Ohio, as the only other backers of the movement.

Vitale has embraced a number of conspiracy theories around the pandemic and has opposed the medical community by telling his constituents to not get tested for the virus. In May, he attacked Dr. Amy Acton, who is Jewish, invoking the term “globalist,” which many interpreted as an anti-Semitic slur.

Acton eventually resigned from her position as Ohio director of health after a number of Republicans began efforts to limit the powers of her office and armed protesters began showing up at her home in the Columbus suburbs.

In a post on Facebook on Monday, Keller compared COVID-19 to “strawberries and shellfish,” claiming it was only “deadly or very dangerous for SOME people.”

Lawrence County has reported 419 cases to date, with seven people currently hospitalized. The county also reported its first death from the virus on Aug. 13. The death toll now stands at 12, with the most recent death reported on Monday.

A DeWine spokesman said the governor is focused on saving lives during the pandemic, helping the economy and getting Ohioans back to work.

“That is what he is focused on. Not this,” said DeWine press secretary Dan Tierney of the impeachment effort.

The speaker of the Ohio House would not say directly whether he supports impeachment, but acknowledged dissatisfaction with many of DeWine’s public health orders.

“The Speaker shares the concerns of many members of the caucus regarding executive branch overreach, in particular with respect to some of the health orders that have been issued, and he has voiced those concerns directly to the governor,” said Taylor Jach, spokeswoman for House Speaker Bob Cupp, a Lima Republican.

Majority Republicans in the Senate don’t have a position on what is entirely a House process, Senate President Larry Obhof, a Medina Republican, said Monday.

Democrats slammed the proposal, as did Jane Timken, the head of the Ohio Republican Party. Timken praised DeWine’s efforts during the pandemic and said in an election year that Republicans should be united in re-electing President Donald Trump.

She called it “despicable” for anyone considering themselves to be conservative to try to impeach DeWine.

The lawmakers opposition to the governor does not appear to have much support from the public. DeWine, a Republican, has maintained support from most Ohioans during the pandemic.

A Quinnipiac poll in June found that 75 percent of voters approved of his job in office, with 77 percent approving his handling of COVID-19.

DeWine’s overall approval was high with both parties, with 76 percent of Republicans approving and 81 percent of Democrats approving.

— The Associated Press contributed to this report.

The Lawrence County Health Department has reported a 12th COVID-19 death on Monday.   The first death was reported on... read more