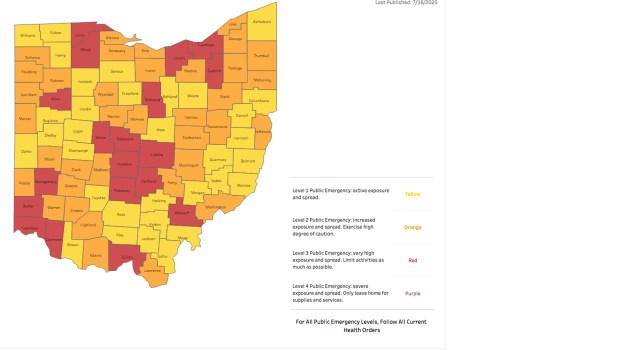 Scioto, Athens among counties at red in latest alert map

In southeastern Ohio, both Scioto and Athens counties were moved into that designation in the latest update, meaning that there is very high rate of exposure to and spread of COVID-19 and people should limit activities as much as possible.

Lawrence County remained at Orange Level Two, which means there is increased exposure to and spread of COVID-19 and people should use a high degree of caution.

While the bulk of the counties at Red Level Three were those around the larger cities, such as Cleveland, Columbus and Cincinnati, DeWine said the listing for Scioto County may have come as a “surprise” for local officials.

“You may not have seen this coming, but what it tells you is, here in Scioto County, we have a problem,” he said.

Counties at Red Level Three are under a mask mandate, requiring people to wear facial coverings in public. DeWine said the mandate will go into effect for the counties added to the list at 6 p.m. on Friday.

“We now have 60 percent of the state of Ohio under a mask mandate,” DeWine said.

No counties were listed at the highest designation Purple Level Four.

DeWine said community spread is a major factor in the determination.

The governor was asked about enforcement of the mask order. The sheriff of Butler County, Richard Jones, said last week that he would not enforce the order.

“We’re not looking to put people in jail,” DeWine said. “But the law is a teacher. A mask order can fundamentally change behavior in those counties.”

DeWine gave a speech on Wednesday night, urging the use of masks statewide, but did not issue a mandate.

All sports skills trainings at South Point high and middle schools are postponed until Aug. 1, after a student athlete... read more