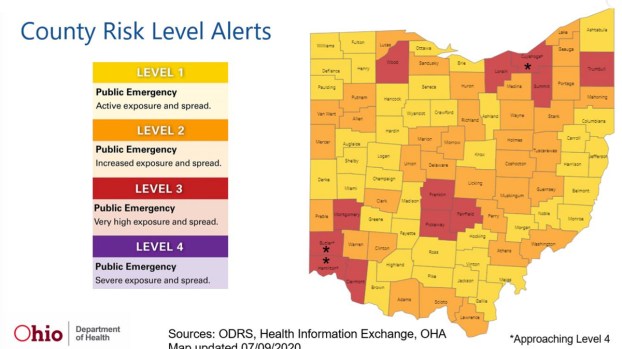 In the update, 12 counties in the state were now listed at Red Level Three in the four-level alert system.

This was an increase from the previous map, which listed seven counties.

None were marked with the highest designation, Purple Level Four, though three at Red Level Tree, Cuyahoga, Butler and Hamilton, were marked on the watch list as approaching Level Four.

Franklin County, in the Columbus area, which was the sole county on the previous watch list, had been taken off, but was still listed as Level Three.

Locally, there was no change in designations, with Lawrence and Scioto counties still listed at Level Two and Jackson and Gallia counties at Level One.

On Tuesday, DeWine issued an order mandating the use of masks or face coverings in public settings for counties listed at Level Three.

Butler County Sheriff Richard Jones, whose Cincinnati-area county is listed at Level Three and is now on the watch list, made headlines on Tuesday evening, when he told media outlets that he would not be enforcing the mask mandate.

DeWine was asked about Jones’ comments by CNN host Chris Cuomo on Wednesday.

The governor said he is friends with his fellow Republican Jones, but that
“he and I do disagree on some issues.”

“The law is a teacher and the law sets norms for society,” DeWine said. “We’re not looking to arrest people.”

The governor said that an education campaign has led to “significant” use of masks and, though not everyone will comply, if at least 85 percent of the public follows through, it will lead to improvements heading into the fall.

“We’re going to slow this thing down dramatically and make the fall better for all of us,” he said.

DeWine said the mandate will remain in place until a county reaches a Level Two designation.

One county saw improvement from a Level Three listing. Huron County, in the northern part of the state, dropped down to a Level Two listing.

Two major crowd draws for the Tri-State region this fall have announced cancellations due to the COVID-19 pandemic. In Milton,... read more