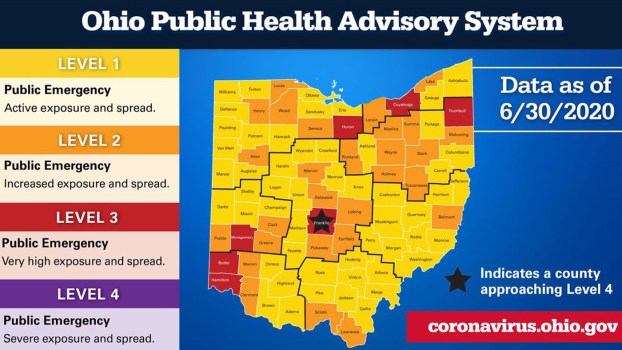 Lawrence County is in second alert level of four-level system

A star is used on the county map to indicate Level 3 counties approaching the highest level. Franklin County, which comprises the Columbus area, is currently marked with this denotation.

Locally, Lawrence County, which has 65 confirmed cases of the virus to date, is listed as Level 2, a distinction shared with 27 other counties in the state, including neighboring Scioto County, at 36 cases. Gallia and Jackson counties are at Level 1, along with 51 other counties.

Seven counties in the state, Cuyahoga, Trumball, Huron, Franklin, Montgomery, Butler and Hamilton, are listed at Level 3, while no counties are at Level 4.