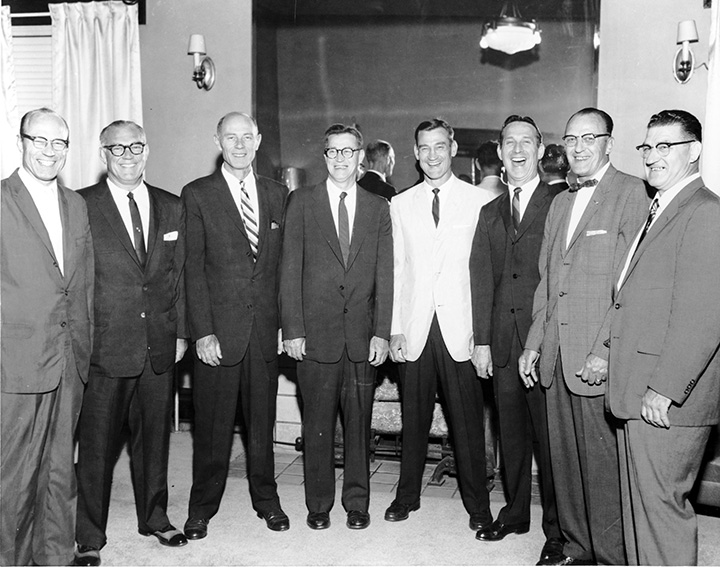 Eight of the nine McAfee brothers played football for Ironton High School. The brothers were Dr. James Paul McAfee, Clarence Shannon McAfee, Commander Clellan Bertram McAfee, John Nichols McAfee, Elbert Archer McAfee, William Marion McAfee, Jack A. McAfee, Wesley Taylor McAfee and George Anderson McAfee. Both George and Wes played in the NFL with George being inducted into the Pro Football Hall of Fame in 1966. The family had 12 children including their sisters Dorothy May McAfee, Perna B. McAfee and Mary Ella McAfee Smith. The eight brothers who played for Ironton were at the 1963 Sports Day reception for George at the Ironton Elks Lodge. Among the brothers attending were John (second from left), George (fifth from left) and Wes (far right).

Forget England. Forget the Queen. Forget royalty.
Since Ironton has always been a football town, it’s only fitting that the royal family had to have been the McAfees.
C. P. (Clarence Potter) McAfee and his wife Mary Lida (Archer) McAfee came to Ironton from Corbin, Ky., looking for work and he found not only a job as the YMCA secretary but a home for his large and growing family.
There were nine McAfee brothers and eight played football for Ironton. Besides the boys, there were three girls in the family.
George and Wes played for Duke University with George earning Pro Football Hall of Fame honors. Wes was drafted in the 16th round and played the 1941 season for the Eagles before taking another job.
George McAfee had four of his prime years erased because of military service during World War II. A 1939 All-American at Duke, he was the second overall pick in the 1940 draft and played the 1940-41 seasons before entering the Navy.
The 6-foot, 165-pounder returned in 1945 and played six more seasons.
George McAfee had explosive speed. He was clocked at 9.7 seconds in the 100-yard dash which is between 10.4 and 10.7 seconds in the 100 meters.
George finished his career with 5,313 all-purpose yards with 1,685 yards rushing, 21 touchdowns, 1,359 receiving yards and 11 touchdowns, four kick returns for TDs and 25 interceptions in eight seasons.
He led the league in punt return average in 1948 and still holds the NFL record for career punt return average with 12.78 yards for anyone with a minimum of 75 returns.
It was during his rookie season that he earned the nickname “One-Play McAfee” because of his threat to score at any time on the field whether rushing, catching a pass, intercepting a pass or returning a kickoff or punt.
In his first professional game, he returned a punt 75 yards for a score and with 30 seconds to play to beat the Brooklyn Dodgers.
He also ran back a kickoff 93 yards for a score and threw a TD pass as the Bears beat the Green Bay Packers.
In the NFL championship game, McAfee ran back an interception 34 yards for a score in a 73-0 crushing of the Washington Redskins.
In 1941, he led the league with a 7.3 yards per carry and with 12 TDs in the 11-game season. He helped lead the Bears to the league title again and was named All-Pro for the first time.
When he returned from the military, he helped the Bears win the 1946 championship.
In fact, Bears’ coach George Halas told McAfee he planned to ease him back into playing shape since he had only four days of practice. McAfee told Halas he fully understood.
McAfee played 12 minutes and carried the ball at only five times. It proved to be lucky for the Steelers as McAfee rushed for 105 yards and three touchdowns.
Halas told the late longtime sports writer Bill Gleason for the Chicago American and Sun-Times that McAfee could have had even greater numbers.
“I played McAfee a quarter and a half because if I played him more he would have ruined the league,” Halas told Gleason.
“And he meant that,” said Gleason. “He was sincere about it. George Halas was not going to ruin the league. McAfee was that good.”
He was named to the NFL 1940s All-Decade Team, was named one of the 100 greatest Bears’ players all-time and had his No. 5 retired. He was elected to the Pro Football Hall of Fame in 1966.
Halas was not only a co-founder of the NFL but coached the Chicago Bears for 40 seasons and won eight NFL titles before retiring in 1967. He called McAfee the greatest running back he ever coached.
The 5-11, 175-pound versatile Wes McAfee played in eight games, carried the ball nine times for 6 yards, caught three passes for 30 yards and a touchdown, completed a pass for 4 yards, kicked two extra points, punted once for 32 yards, returned three punts for 21 yards and ran back two kickoffs for a total of 64 yards.
George retired after the 1950 season and teamed with Wes in Durham, N.C., to start the McAfee Oil Company, a Shell Oil distributing company. They ran the company for 30 years and then sold it.
John McAfee played football and baseball at Ohio State. He was all-conference as a power hitting first baseman who was known for his clutch hitting and defense.
He went on to coach high school football and baseball for 39 years at Youngstown South and was inducted into the Ohio High School Football Coaches’ Hall of Fame in 1974.
John almost followed George and Wes to Duke only to have Ironton coach Charlton “Shorty” Davies — a former Ohio State football player — convince John to play for the Buckeyes.
A fourth brother attended college to play football when Jack McAfee went to William and Mary.
Jack played as a freshman in 1939 and then played with the Newport News Builders of the DFL minor league in the 1940-41 seasons.