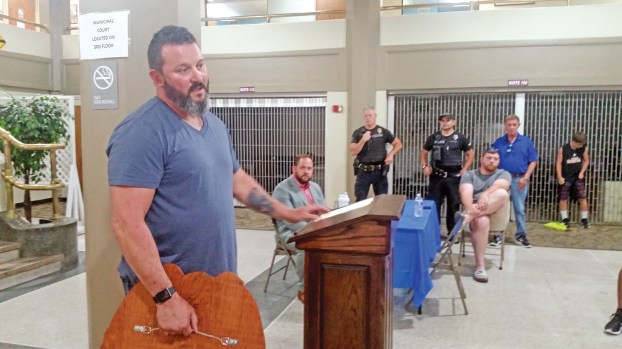 Ironton Police officer Sgt. Jamie Pruitt received a shield in the shape of badge during his retirement party on Wednesday. Over the last 24 years, he served at Proctorville Police Department, the Lawrence County Sheriff’s Office and the IPD. (The Ironton Tribune | Mark Shaffer)

Officer steps down after 24 years

On Wednesday, the Ironton Police Department gathered to say good-bye to one of their own, Sgt. Jamie Pruitt, who is retiring after 11 years with the department as he ended 24 years in law enforcement in Lawrence County.

Pruitt got his peace officer certification from Collins Career Technical Center in 1995, joined the Proctorville Police Department as a road officer in 1996 and became the police chief, before heading to the Lawrence County Sheriff’s Office, where he became a detective and then came to the IPD in 2009.

He is half of the IPD detective bureau and on the Special Response Team and the Major Drugs Task Force.

Pruitt said he was retiring because 24 years was enough.

He said he stayed with the job because it’s what he knows.

“And God gave me a knack and I was pretty good at it,” Pruitt said. “But it is time for one of the younger guys to take over. The job wears on you and takes time away from your family and the holidays. It was just time to hang it up.”

He said he was looking forward to the simplicity of a 40 hour a week job.

But he said he will miss the camaraderie of being in law enforcement.

“We are a group of guys who work well together, we understand each other and we go out of the way for each other,” Pruitt said. “But I won’t miss the doom and gloom, that is all we see. We don’t get invited to people’s house for cook outs. It’s because someone got hit in the head at the cook out.”

His wife, Erica, said she is looking forward to his retirement.

“It is very tough. There is always the worry that he won’t make it home, I’m relieved that I won’t have to worry about that anymore,” she said, adding that she is looking forward to more family time together. “I just want him to know we are proud of him and for the service he has given to our community. He’s not only a great police officer, but a great husband and father and a great family man.”

His partner in the IPD Detective Bureau, Capt. Joe Ross, called Pruitt’s retirement bittersweet. The two have worked together for four years.

“I hate to see him go. He’s been an asset to me and the department,” he said. “He’s given a lot to the community.”

During his retirement party, Pruitt received a large wooden shield in the shape of badge as a token of their appreciation.

“It’s been a pleasure to work with all of you,” he said. “The help from everybody who works in this city makes this job that much easier. I appreciate all of you.”

He said his 24 years in law enforcement seems like a long time but they flashed by. He said he missed a lot of time with his three kids and thought it was time to start to “put my time while there was still time to spend time with them.”

“Jamie wears a lot of hats, he’s a sergeant in our detective bureau, head of our drug task force and he’s worked very hard,” she said. “He’s highly decorated, however he’s been in law enforcement for 24 years and we do understand there is life after this. He does have children and family and he’s ready to go to the next step in his journey.”

“We’re going to miss having him around,” she added. “But we aren’t going to tell him that.”