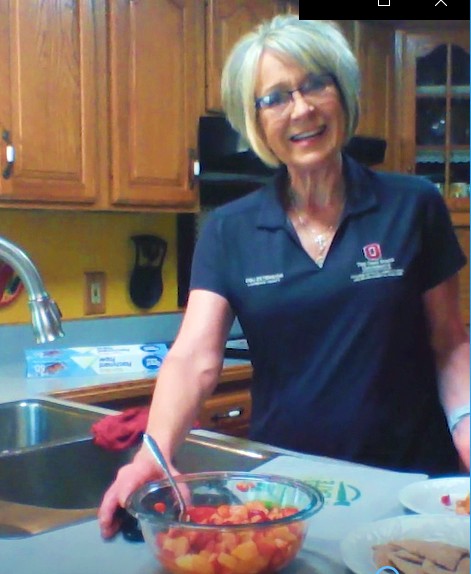 Peggy Jensen, the program assistant with the Ohio State University Extension Office in Lawerence County has recently taken to the internet to continue her SNAP-Ed classes on healthy and budget-stretching cooking classes. (Submitted Photo)

Lawrence County’s Ohio State University Extension has a program aimed at helping those on SNAP learn to cook recipes that help stretch a limited food budget.

Peggy Jensen runs the SNAP-Ed classes with a goal of showing her students you can make good food at home that is better for them than just getting prepackaged foods.

“SNAP-Ed is supposed to help people lead healthier lives. It teaches people who have SNAP about good nutrition and how to make the food dollars stretch farther,” Jensen said. The program also includes physical activities too “since we are all getting a little overweight here,” with people only now starting to get active again after the quarantine.

The extension office works with a partner agency, like Ohio Jobs and Family Services, Land of Goshen or Mahajan Therapeutics, with the SNAP-Ed program.

Because the state has mandated that gatherings of more than 10 people have been discouraged, Jensen, like many people, has had to change how she works and gets her program’s message out.

Like everyone, Jensen has taken the course online, which means a change for her, as well as the clients.

“I’m camera shy, so that’s been fun,” she said, with a laugh. “I’ve been making recordings, about five to 10 minutes long, and try to get a little bit of information out about eating healthy. And usually, I give them a recipe and I do a cooking demonstration so they can see how easy it really is to put it together. I have a few ‘ums’ and ‘oops’ in there, but I think people expect that.”

She said, in many cases, people never learned how to cook and she can show them how easy it really is.

“I did one recently and I showed them how to make fruit salsa and I did one on making cinnamon sugar chips out of tortillas,” Jensen said. “It is so good. It is a little sugary, but they are getting the fruit into their diet. Most people don’t eat enough fruit and this shows them how they can make something tasty and quick rather than running out and getting a candy bar. And it can be stored and eaten later. So, it is handy to have.”

And Jensen said they are going to start teaching the class live online.

“So that way, it is more interactive, like when we have it in a classroom setting,” she said. “They’re saying with the coronavirus and everything else going on, people’s attention span isn’t the same, so we’re shortening it to about 20 minutes. And it will be a lot more interactive since it will be on Zoom meetings.”

The videos are not available on YouTube, Jensen said. She gives the videos to her partners and they may post them online and they may eventually be posted on the OSU Lawrence County Extension website.

Jensen said the program is very useful for people who may not have grown up with a family that cooked much and are used to making meals out of prepackaged microwavable food or from fast food restaurants.

She had a granddaughter who never really learned to cook until she was in her late teens and she said that really opened her eyes.

“So, almost every program I do focuses on physical activity or it focuses on cooking skills basics like ‘How do I make this dish? I’ve had it before and it’s good, but how do I make it?’ The class lowers their fear of trying,” Jensen said. “And it works. I have people who come back and say ‘I never thought about eating hummus or a fruit parfait.’ But now they do, because it is simple.”

She said once people get over their fear of cooking and thinking they can’t do it, “it makes a big difference. You can learn really quickly.”