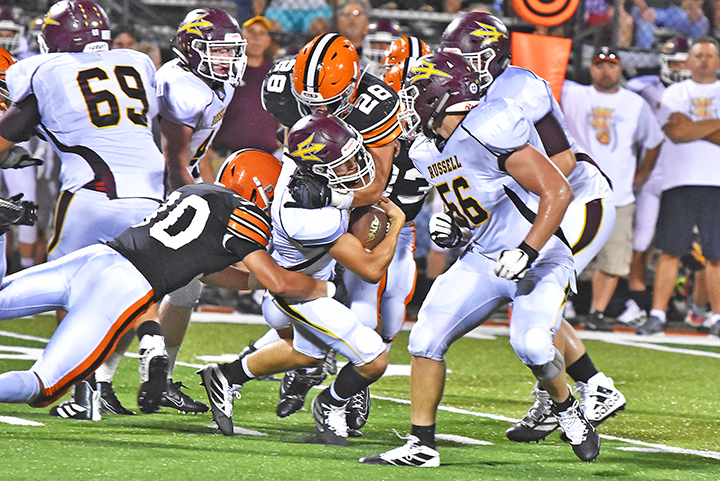 Ironton Fighting Tigers’ linebacker Reid Carrico (28) makes a big hit on a Russell running back. Carrico has been selected to play in the Under Armour All-American Game. (Kent Sanborn/Southern Ohio Sports Photos)

Regardless the brand of athletic apparel Reid Carrico is wearing now, he’ll be donning Under Armour come next January.
The Ironton Fighting Tigers’ first team All-Ohio linebacker has been invited to play in the annual United States Army Under Armour All-American Game that will air January 9 from Florida on WSAZ-TV 3.
More than 450 players in NFL have played in the Under Armour game.
“The invitation was a big surprise for me. I was honored to receive it,” said Carrico. “That’s one of the check boxes that everyone has when they want to make it big.”
Carrico is not only the first Ironton player to be selected to play in the game, but the first player from Southeastern Ohio.
Carrico was a key to Ironton’s 13-2 record last season and the Division 5 state runner-up trophy. He was named the Associated Press Southeast District Defensive Player of the Year and that was followed by his selection as the Division 5 state Defensive Player of the Year.
The 6-foot-3, 225-pound junior ran 191 times for 15,90 yards and scored 28 touchdowns including seven times in the five postseason games.
Defensively, Carrico racked up 168 tackles including 18 for a loss, three sacks and four forced fumbles. He recovered three fumbles, intercepted one pass and had two defensive touchdowns.
Carrico was recruited by dozens of Division I programs before giving a verbal commitment to Ohio State on Sept. 10.
Besides Ohio State, Carrico got offers from Clemson, Alabama, Notre Dame, Penn State, Michigan, Wisconsin, Tennessee, LSU, Kentucky, Texas, Oklahoma, Indiana, Louisville, Duke and Iowa State.
“Although it is only an exhibition, I’m honored to be able to play with other highly touted recruits from across the country,” said Carrico.

Jim Walker jim.walker@irontontribune.com The manner in which the NFL draft will be conducted is totally different. Now let’s see if... read more