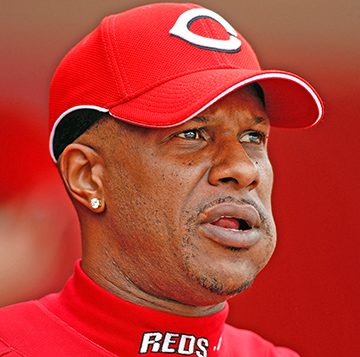 “Fairy tales can come true, they can happen to you, if you’re young at heart.”

It’s doubtful that a 12-year-old boy in 1974 South Los Angeles was a fan of Frank Sinatra and made this his favorite song.

But for Eric Davis, who was a 12-year-old with a dream of playing in the NBA was always in the forefront of his mind, this was a fairy tale that he believed was going to come true.

And one of Davis’ dreams did come true when he became a member of the Cincinnati Reds. In fact, the former major league great is now helping young kids achieve their dreams.

Davis is in his 12th year as a Reds’ special assistant for player performance, and with his extended playing career he knows something about helping players improve their performances and make their dreams become less of a fairy tale.

“I oversee specifically how the players are performing and why they are performing good or bad and which way they are doing it. I make sure our coaches are giving them everything they need and that the communication is where it’s supposed to be,” said Davis.

“The kids need many things and it’s my job to make sure they get it throughout the whole organization from the major leagues to the minor leagues. And just putting them in the best possible situation to give them the best chance to fulfill their dreams.”

Davis grew up playing kid games like run down or where you can only hit doubles or you have to hit the ball the other way because of the limited number of players available on days when he was on the playground shooting basketball and working toward his initial dream.

And it was a good thing Davis utilized all his athletic ability to play several sports and create additional dreams.

His dream of playing in the NBA took a left turn when the Reds selected him in the eighth round — the 200th pick overall — of the 1980 Major League Baseball draft. His close friend Darryl Strawberry was drafted first by the New York Mets.

Although the man who would become known as Eric the Red averaged 29 points and 10 assists a game at John C. Fremont High School. However, when baseball season arrived he batted. 635 with 50 stolen bases in 15 games.

Not interested in attending college, the new dream switched making the major leagues and it became a reality on May 19, 1984 when the 21-year-old rookie made his big-league debut with the Reds.

Davis jumped started Cincinnati to the 1990 World Series title when the Reds not only stunned the sports world by not only winning the championship but sweeping the heavily-favored Oakland A’s led by the famed Bash Brothers Mark McGwire and Jose Canseco.

In the first inning of Game 1 in Cincinnati, A’s starter Dave Stewart entered the game with a six-game postseason winning streak and was 22-11 in the regular season, his fourth straight 20-win season.

Billy Hatcher singled and Davis smashed a two-run homer for a quick 2-0 lead as the Reds went on to win 7-0.

“So, I kind of had that in my mind because it was almost the same situation with two outs and a runner on. I thought if he throws me a first-pitch fastball, I ain’t taking it this time because he’s going to end up throwing me four splits and walk me. And the first pitch he threw me was almost like it slowed down. It was like everything slowed down. I was preparing for that moment, and once he did that it was just a matter of how far, not if it was going out.”

The Reds won the next two games 5-4 and 8-3, but in Game 4 they lost Billy Hatcher in the first inning when he was hit by a pitch and broke his hand and Davis went out with a bruised kidney diving for a ball in the outfield.

The Reds rallied in the eighth inning to win 2-1 behind the stellar pitching of Jose Rijo with Nasty Boy Randy Myers getting the final two outs for the save.

Davis and other Reds’ players have talked about the season as they went wire-to-wire in first place including nine straight wins to start the season. And all the players said one key to their success was how well the group meshed.

“We were a real close-knit squad and the reason for that is we were all drafted by the Reds. Me and (Tom) Browning played in the minors in Double A and then Barry (Larkin) and Joe (Oliver) and Sabe (Chris Sabo) and all those guys came behind. If you look at our roster, it was home grown,” said Davis.

“We had (Rob) Dibble so we traded Johnny Franco who was a tremendous closer for the Mets and got Randy Myers and we had (Norm) Charlton. I played ball with Paul O’Neill. That was just our camaraderie, going through instructional league three or four years. That was something Pete Rose put together.”

Rose took over as manager in 1984 for a Reds’ franchise that was consistently a last-place team in the early 1980s. The Reds finished second in five or Rose’s six season as manager and the offseason moves cemented what the team needed.

But Rose was found guilty of betting on his team and banned from baseball in 1989. Lou Piniella took over in 1990 and was praised for the job he did. Davis said Piniella was a good manager, but he thought Rose was unfairly forgotten.

“(Rose) should have got a lot more credit because he put us together. He was real big in youth. I came through the big leagues at 21-years old. Then you see in ’86 Tracy Jones, Kal Daniels, Paul O’Neill. He took five rookies, so he started the process of us becoming major leaguers,” said Davis.

“And when we got there, they had a lockout in spring training and we only got 10 games. Our very first game was the first time we opened on the road and Barry Larkin hit a bases-loaded triple in the 10th inning and we won our first nine games and everything was academic. It was a magical moment.”

Davis came back to Cincinnati in 1996 and had 26 home runs, 83 runs batted in while hitting .287 and stealing 21 games. But manager Ray Knight and Davis did not get along and the Reds shipped him to Baltimore.

Davis battled colon cancer in 1997 but in September while still in treatment, he returned to the team and worked to try and regain his form. During the AL championship series, Davis hit a game-winning home run.

After the season, Davis was awarded the Roberto Clemente Award. He returned to the Orioles in 1998 and hit .327 — fourth best in the AL — to go with 28 home runs and he had a 30-game hitting streak.

But his next three seasons were filled with more injuries and he retired after the 2001 season.

Davis played 17 seasons that included the two stints with the Reds along with the Dodgers, Tigers, Orioles, St. Louis Cardinals and San Francisco Giants.

Davis was the first Reds’ player in the 30-30 club when he belted 37 home runs and stole 50 bases in 1987 during his second stint with the Reds.

Reds’ outfielder Paul O’Neill was a key player in the 1990 season. He said Davis was “the best hitter, best runner, best outfielder, best everything I ever saw.”

Now 57 years old, Davis said you never have time to reflect on your career, your success and your mistakes when playing. He has the time now to occasionally think about his career, especially as the Reds celebrate the 30th anniversary of the 1990 World Championship season.

“The thing about sports is the moments come so quickly and before you know it, you’re gone. It’s hard to fathom that we won the World Series 30 years ago,” said Davis.

“The offseason is shorter and before you know it, it’s the next year. You don’t have time to enjoy it. Now that I’m retired, I’m in a different role and I get a chance to relish a lot of the things that I’ve accomplished, the team success and my individual success because when you’re still playing you don’t have time for that because you’re always got to prove yourself every year.”

And by proving himself every year, Eric Davis was able to turn Pinocchio into a real boy.