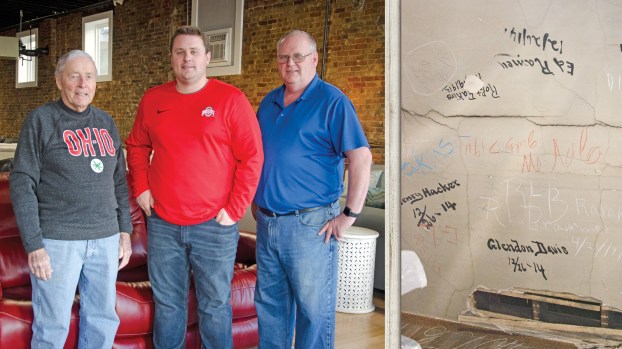 PROFILE 2020 – A Continuing Legacy: Central Hardware’s owners are latest in a long line of locals

Figuring just how long Central Hardware has been a part of Ironton’s downtown history is a little complicated.

But, no matter which measure you use, it has been there for more than a century.

“I argue since 1871,” owner Rich Donohue said, choosing the date of the building’s construction at Second and Center streets, when it housed a hardware and business company, the Hutsinpillar-Sheridan Co., which had multiple locations in Ohio.

However, the name Central Hardware dates to 1909, when it was launched at another location.

Following a fire, Central Hardware moved into the Hutsinpillar-Sheridan location.

“It’s been a hardware company ever since,” Donohue said.

The building’s long history is evident when Donohue takes you to its top floors by freight elevator.

There, in the backroom, names of workers and visitors can be found on the ceiling, signed with dates to the early 1900s, while, on one wall in another room, the names “Guthrie & Gates” are dated to 1896, which Donohue says he believes is the oldest in the store. Altogether, the names span more than 70 years.

Another sign of the decades of workers who have passed through the building can be found on an employee stairwell in the back, as Donohue points to the stains from tobacco spit that accumulated long ago.

Donohue said the business thrived, in part, because of its convenient location near the river, with employees bringing goods straight up from the docks to the store.

Donohue purchased Central Hardware in 2016, taking over from a man who had run it for almost six decades.

Roy Ratliff’s father purchased Central in the 1950s and Roy, a World War II veteran, had a store in Portsmouth.

In 1959, he bought Central from his father and closed the Portsmouth shop, and he’s been there ever since.

Even after selling to Donohue, he still can be found in the store daily.

When Ratliff is asked how the business has changed over the years, he says it has moved away from its agricultural focus.

“We sold horse drawn plows and horseshoes,” Ratliff said. “And a lot of bulk seeds for farmers.”

Ratliff explains the longevity of     the store.

“It’s because we provided goods and services for the public and they bought on credit,” he said. “And we always tried to help everyone.”

In addition to hardware, the store sells three floors of furniture. Since purchasing, Donohue remodeled some of the upstairs showrooms, and also expanded the store to the adjacent building next door.

The site of a clothing store in the 1980s, it now serves as a furniture showroom as well.

Donohue points to the seams in the walls, where you can see how that building was expanded over the years.

“We’ve taken it back close to what it looked like when it was built,” he said of its remodel, stating they used old photos to get it accurate.

He said they have also added to the store’s inventory, in addition to expanding space.

When asked what it’s been like having another similar business directly across the street at Iron City Hardware for nearly as long, Donohue says it has never been seen as an issue.

“It’s not really compa competition,” he said. “We work well together.”

Also working at the store is Donohue’s son, Chris.

When asked his job title, Rich replies “the future.”

Both Ratliff and Donohue have been heavily involved in the Ironton-Lawrence County Memorial Day Parade and Donohue is a contributor to many civic groups. He said it is part of the store’s appeal.

“We’re locally owned and we’re invested in this community,” he said.

When I was a child, our family lived on a farm in Rome Township. Papa was a farmer for many... read more