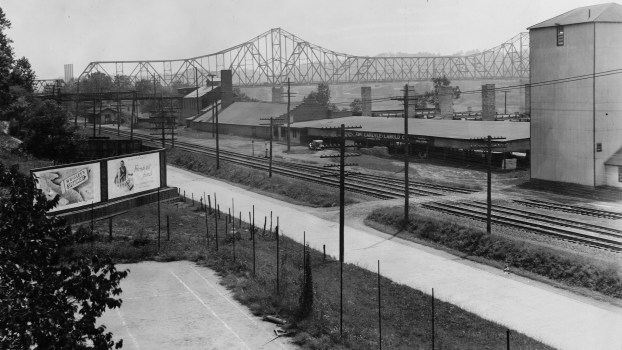 The Carlyle Tile and Brick Company was a staple of Coal Grove industry until its collapse in 1978. The plant has been demolished and the area reclaimed.

Looking back: The Carlyle Tile and Brick Company was a staple of Coal Grove industry

In the shadow of the colorful Ben Williamson and Simeon Willis Memorial Bridges that connect Ashland, Kentucky and Coal Grove lies an empty field, but, decades ago, when only one bridge connected the two states, there stood a brick and tile plant known throughout the country.
The Carlyle Labold Tile and Brick Company in Coal Grove evolved from the brickyard constructed along the Ohio River by John Peters in the late 1800s. The change to the more commonly-known name came after new ownership and expanded products.

Perhaps the most-remembered aspect of the plant by the average Lawrence County resident was the trestle over the old U.S. 52, on which mules were used to carry clay from the nearby quarry.

“They usually did it early in the morning or late in the afternoon,” Juanita Markel, Coal Grove resident whose father worked at the plant, said. “I remember traffic would slow down to watch the animal move across the trestle above the road. We didn’t have the highway back then, just the two-lane road. It was funny seeing the animal walking above where people were driving.”

Even though it is known as the Carlyle Labold Tile and Brick Company, and was purchased by Labold in 1923, the plant was sold to the Mosaic Tile Company in 1935. Mosaic owned the plant until legal issues, and eventually all operations ceased in 1978.

The closing of the plant had a massive impact on the community, taking away needed jobs, Markel said.

“My father had retired before the plant closed, but there were still a lot of people working there, quite a few families affected,” Markel said. “Of course, it was a lot easier to find work back then than it is now. There were more factories.”

After sitting vacant for years, cleanup efforts began in 2006. Nearly 7,000 tons of contaminated soil were removed from the 33-acre property before the structures were demolished.

Ohio EPA announced the property ready for redevelopment in 2012.

Bill Dingus, director of the Lawrence County Economic Development Group, said at the time the river frontage site that was once an “eyesore at our front door when people came across the Ashland Bridge” is “extremely valuable” for the county.

Markel said she hopes the space becomes occupied again soon, and becomes a source of employment for the community once again. She warns however, that it should be something clean, something that does not negatively affect the Ohio River.

The Lawrence County Science Fair was set to take place on Thursday at Ironton Middle School, with a record number... read more