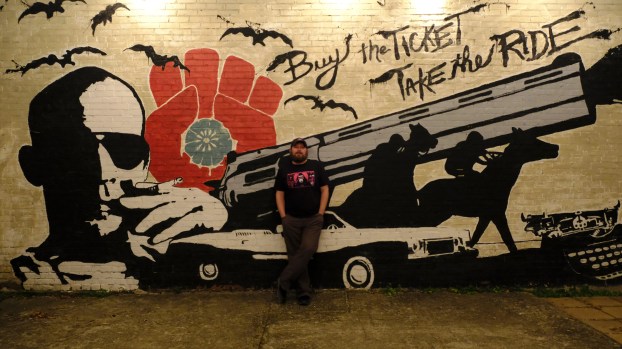 If you are a music fan in the Tri-State, you have certainly seen the work of graphic artist Jimbo Valentine. You just might not know it. (Photography by Mark Williams)

If you are a music fan in the Tri-State, you have certainly seen the work of graphic artist Jimbo Valentine. You just might not know it. Now approaching his 11th year as the resident designer for the V Club in Huntington, Valentine’s crisp, psychedelic imagery has adorned nearly 1,800 posters for concerts around the region. His work is the informative face for local, regional and national touring acts of all genres, as well as long-running festivals like the Huntington Music and Arts Fest and Kickin’ It On The Creek.

“For the V Club, it has always been a marketing tool first,” said Valentine. “The posters serve a purpose, so that informs a lot of the design. That’s why they are laid out the way they are. They’re easy to read, easy to post online. I often start with an image and text and build from there.”

However, these aren’t simply flyers. Valentine’s other-worldly designs give concerts a visual life of their own, turning simple gig posters into wall-worthy pieces of functional art.

“There’s experimentation and inspiration of all sorts,” Valentine said when discussing his neo-psychedelic aesthetic. “I love experimental film and music. I love the darker, more psychological side of psychedelic art. It’s kind of ingrained in me at this point. Sometimes I almost have to stop myself from making everything that way, because not everything calls for that. But for the most part, when people come to me, they’re wanting at least a little bit of it.”

While concert posters are a major part of Valentine’s body of work, he also designs countless T-shirts and logos for regional bands and businesses, publishes his own comics and illustration books and even designs album artwork and layouts. Most recently, working with renowned illustrator Tony Moore, Valentine designed the artwork for Tyler Childer’s new album Country Squire. Visually speaking, the album and its sprawling, three-panel foldout of Appalachian psychedelia is perhaps the most unlikely work to ever sit atop the country charts.

“Tony Moore is actually someone who really inspires me. His illustrations are out of this world,” Valentine said. “Working with someone like him really makes you bring your A game. And Tyler…his mind can go way out there. To have such a different album cover…he put out an album without his name on the front! Who does that?! No one in country music, that’s for sure.”

Using programs like Photoshop, Illustrator and Manga Studio, Valentine’s style is a combination of image reappropriation, photography, illustration and manipulation. The results are vividly cosmic and ripe with detailed precision. Never one to hide his process, he would often work on poster designs at the V Club amidst friends and crowds. He is also more than willing to share his experience and advice with aspiring designers.

“The single best piece of advice I ever got was ‘Go into Photoshop and delete all your effects and filters,’” Valentine said. “I thought it was crazy at the time, but it really helped me learn how to make those effects manually, and how to use them subtly. Now I can incorporate them much more effectively in my work.”

The tight-knit and growing arts community in Huntington has allowed Valentine to flourish, and is precisely what has kept him here for close to 18 years.

“People here really support each other, no matter what it is. That’s what keeps me going. We could maybe do a little better job as a city promoting smaller events. I’ve thought for a while that the city should have some sort of all-inclusive calendar of events. Like a hub-style site where anyone can upload an event. I feel pretty plugged into what’s happening in town, but there’s so much happening these days, it’s still easy for me to miss an event, or to not hear about it until it’s too late.”

The coming calendar year is, as always, full of artistic projects for Valentine. He plans to release more issues of his comic book series Coordinates Unknown, as well as a compiled edition of his zine Pipe (BOMB) Dreams. A book of selected gig posters is in the works, as are anniversary art shows, more album designs, and of course, more posters for V Club and the area music scene. No matter what avenue he chooses, it will surely remain distinctly Jimbo.

“I’ve been very lucky not to have to compromise my art,” Valentine said. “When people ask me to do something, they kind of know what they’re expecting. I’ve had people in the past who didn’t understand it, but now, it’s funny…people want me to make it weird for them.”

For more information on Jimbo Valentine and his work, visit www.amalgamunlimited.com.