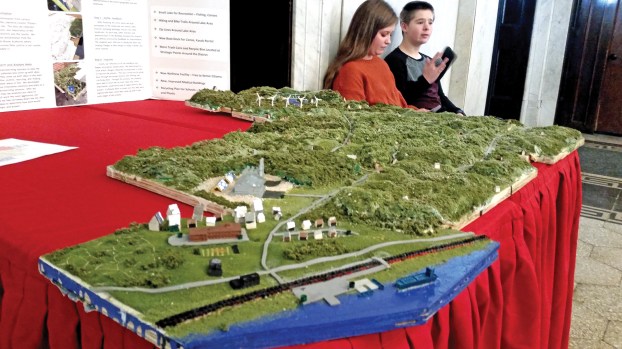 On Tuesday, people going through the Lawrence County Courthouse had a chance to see the future.

Or at least a vision of what the future of several communities could be as envisioned by students in Collins Career Technical Center’s Project Lead The Way STEM program.

Using the county’s Project First Impression as inspiration, the eighth-grade students made detailed dioramas of their communities as it could be a decade from now.

“What our students did was envision what they want their school district to look like in 2030,” Matt Monteville, satellite director for the program said. “That should be about the time they graduate from college and start settling down and buying their new home.”

The students were asked what they would want to have in their school district and to focus on things like litter pick up and recycling of waste materials. They also had to think of what would make their area a better place to live.

“If you look, there are zip lines and other things to do for entertainment like hiking trails, they put miniature golf course in at Rock Hill,” Monteville said. “But they also had to think about the entire population, so they had to think what would be better for the elderly community. So, they came up with housing ideas.”

Monteville said one of the neat things about the project is that they had to think more about the area they live in.

“Kids do not know a whole lot about their school district, they knew where they lived and they know how to get to the school,” he said. “But a lot of Symmes Valley students didn’t know where Timber Ridge Lake was and that it is part of their school district. Same thing with Lake Vesuvius or Wayne National Forest or Dean State Forest. When they had to build the model, they had to put the roads on and really learn what we already have.”

The models were built by teams of students from Chesapeake, South Point, Dawson-Bryant, Ironton, Rock Hill and Symmes Valley middle schools, but just two students per school showed off their models on three floors of the courthouse.

Addis said with their model, their team decided to have more activities available to people and to reduce trash.

“I liked doing this because we all worked together,” she said, adding their team was made up of 30 people.

Blagg said it was pretty complex to put the model together.

“Some parts were harder than others,” he said. “We bought some trees and animals for the model, but we made the rest of it.”

Ironton was represented by Braidy Medinger and Danielle Leonard.

“The main thing I enjoyed was getting together with our team and our classmates and being able to work together,” Medinger said. “It really took everyone, a whole team of bright minds, to do this.”

Leonard explained their model was Ironton in 2030 and the team wanted it to look better. She said after Lawrence County was declared the trashiest county in Ohio, “we realized we had to do something about that as the younger generation moving forward.”

Their model included the solar panels, more recycling bins around town and a community garden.

“Our main thing is we wanted younger people to come here and be able to start families,” she said. “And we wanted the younger generation’s numbers to rise and be a better place to live. That was one of our main points.”

GTL Lumber Inc., which bought the former Muth Lumber facility in Ironton, is happy with the progress of the plant.... read more