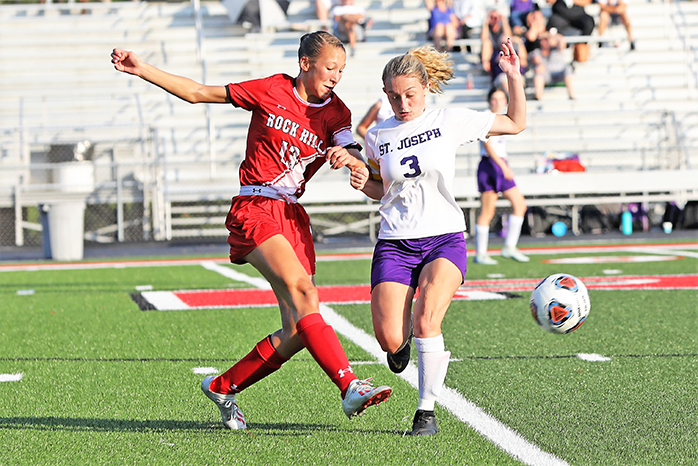 PEDRO — Two tough games, two gritty efforts by the St. Joseph Lady Flyers.
St. Joseph battled a strong Minford team on Monday in a Southern Ohio Conference game, then came back to face the unbeaten Rock Hill Redwomen on Wednesday.
The Lady Flyers were tied at halftime against Minford before falling 9-6. They came back to battle Rock Hill to a 2-2 time.
St. Joseph had to alter its lineup against Rock Hill but had a lead until late in the game.
“Our girls fought hard the entire game. We as coaches and our fans couldn’t be prouder of this bunch of young ladies,” said Lady Flyers’ coach Dan Blair.
“It was a very physical game. Rock Hill has a really nice team. Coach (Luke) Simpson does a nice job.”
Emma Whaley scored with an assist from Lydia Sheridan at the six-minute mark as St. Joseph took a 1-0 lead.
Rock Hill tied the game at the 35-minute mark when Makayla Scott got a goal by firing a shot high over the keeper’s head who came out to challenge the shot.
The game remained tied until Whaley scored with 62:00 on the clock as she went one-on-one with the keeper.
But with time winding down, Bri Reynolds scored to tie the game and it ended in a deadlock.
Lady Flyers’ goalkeeper Bella Whaley had 10 saves while Rock Hill’s goalie Grace Stevens recorded three saves.
“Bella Whaley took over the goal duties for this match and played an excellent game,” said Blair.
On Monday, there was no school on Labor Day but the Lady Flyers were busy as usual.
A 10 a.m. start wasn’t a problem for the Lady Flyers who were missing a few players and had no substitutes.
But as the temperatures rose on the muggy morning, the Lady Flyers began to feel the effects.
“Without subs, we just ran out of gas,” said Blair.
One player who was on fire was Emma Whaley who scored five of the Lady Flyers’ six goals. Freshman Aubrey Sutton had the other goal.
It was far from a one-man effort as Laiken Unger had two assists while Bella Whaley, Sheridan and Sutton each had an assist.
The game see-sawed in the first half as each team scored five goals.
But after the game reached the 60-minute mark, the lack of rest began to take its toll as Minford pulled away.
St. Joseph had 16 shots on goal while Minford had 24. Lady Flyers’ goalie Gracie Damron turned in a stellar effort with nine saves.
St. Joseph visits Chesapeake at 5:30 p.m. on Monday.

For the past few months, the Lawrence County Animal Shelter has been dealing with an overpopulation of cats, with its... read more