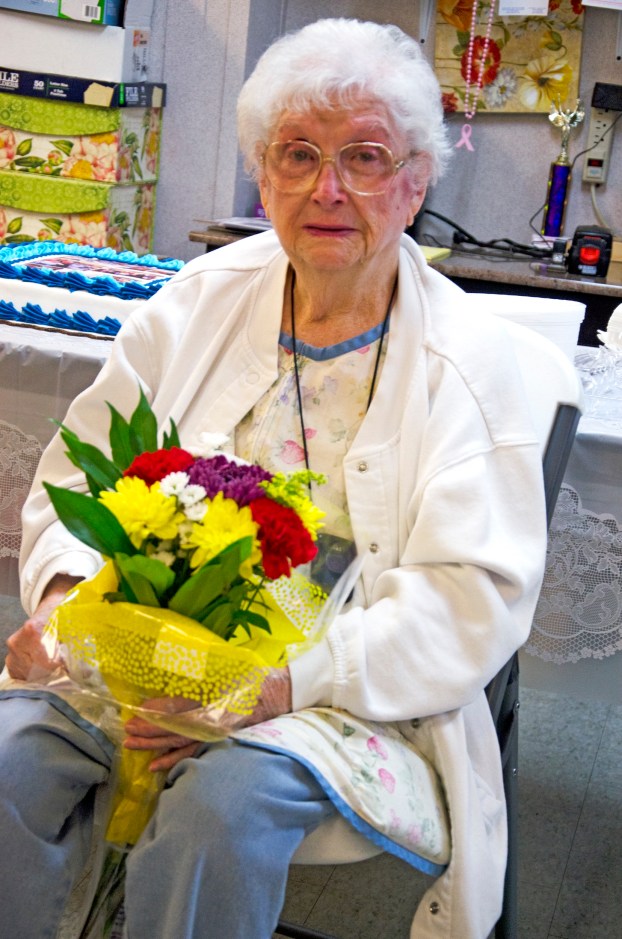 Opal Cecil is presented with flowers at the Sybene-Chesapeake Senior Center on Friday. (The Tribune|Heath Harrison)

CHESAPEAKE — Opal Cecil has been attending the Sybene-Chespapeake Senior Center since its inception.

“She’s been here from the start,” director Darlene Green said, noting that that Cecil’s involvement predates the current center and goes back to its preceding location. “She was with us when we were back in Sybene.”

On Friday, the center, along with Lawrence County Commissioner Freddie Hayes Jr., honored Cecil, 94, of Chesapeake, for her commitment by celebrating “Opal Cecil Day” at the center.

“Opal, we love you and this is your day,” Hayes said.

Green described Cecil, who was moved by the event, as “a true inspiration,” citing her dedication to the center’s activities, such as baking treats such as banana bread strawberry bread, zucchini bread and pina colada cakes for the center each week.

She said when Cecil started coming to the center, she rarely missed a day of activities until just recently.

Previously named the center’s Senior of the Year in 2017, Cecil said she had no idea of the surprise planned for her Friday, where she presented with a bouquet of flowers.

Green asked the packed room to speak about Cecil, and they all chimed in.

“She has the sharpest mind,” said another. “She’s sharp as a tack and very witty.”

She’s a good card player,” came a response from another.

A few focused on her skills in the kitchen, citing her previous work owning a restaurant.

“She had a restaurant all those years, so she knows if food is good or not,” one said.

Green summed up the attitude in the room.

“We enjoy having you here so much and we love you,” she said.