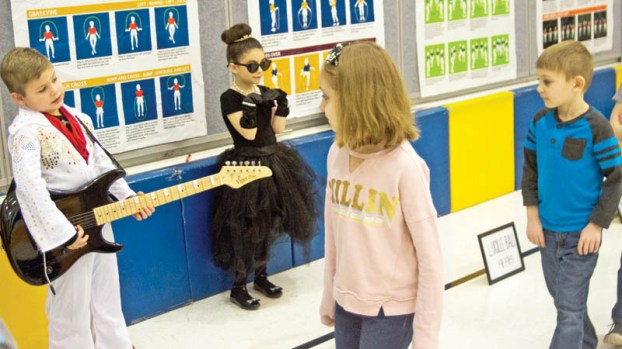 BURLINGTON — Students at Burlington Elementary portrayed figures from history and the present day in the school’s Living Wax Museum on Thursday.

About 65 students from the school’s three second grade classes lined the gymnasium and posed as a person of their choice, which ranged from past presidents like Theodore Roosevelt and George Washington, athletic legends like Babe Ruth and Pete Rose, civil rights leaders like Rosa Parks, Martin Luther King Jr. and Harriet Tubman, and artists and creators like Leonardo Da Vinci and Marvel Comics’ Stan Lee.

“It seems like, every year, they find new and innovative ways to do the costumes,” teacher Amanda Clay said.

The students came up with a top three list of whom they wanted to portray and then were given approval by teachers to avoid duplication, teacher Mary Matney, said.

“We have a good mix of current people and historical people,” she said.

The teachers said while there are some staples who return each year and are always popular choices for students, such as Audrey Hepburn and Michael Jackson, this year’s saw new entries, such as pilot Eugene Ballard and Secretariat racer Penny Chenery.

The students posed for their classmates, who toured the museum throughout the school day, and the school hosted a showing for parents in the evening.

This was the third year the school has had the event.

BURLINGTON — Each February, students at Burlington Elementary are greeted by a display to commemorate Black History Month. The display... read more