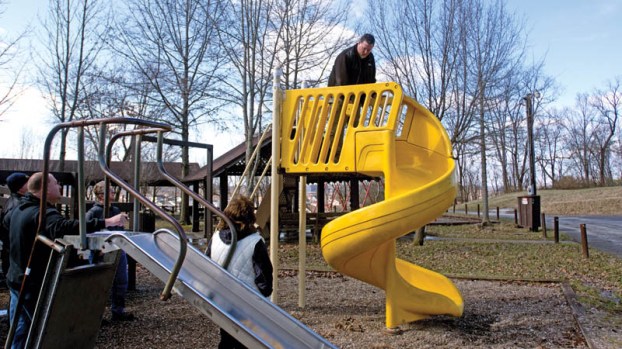 Insurance adjuster Greg Hencke consults with Coal Grove councilman Jay Sherman, Coal Grove Betterment Club president Vicky McDaniel, Police Chief Eric Spurlock and Mayor Larry McDaniel about which pieces of playground equipment is in compliance with state law. The older metal slide is not because kids could hit their heads on the bars.

Adjuster says Paul Porter Park playground not up to code

COAL GROVE — It was not the best news on Thursday for Paul Porter Park in Coal Grove.

On Thursday, the village’s risk assessor from their insurance company looked over the park to see if the swings, slides and playhouse presented a liability and was up to current code.

Much of the equipment was installed three decades ago, before state laws on playground equipment were changed and before the Americans with  Disabilities Act was made law. The village is trying to come up with matching funds to get a grant to make the playground more accessible for kids with disabilities.

But because of its age, much of the equipment needs to be changed or replaced.

The swings are 24 inches apart and should be 30 inches apart. The metal slide isn’t compliant because the metal bars on the top present a danger of head injury. That means both items have to be removed.

The plastic yellow slide was tested with a plastic device the size of a child’s torso to make sure that a kid can’t get stuck. It passed, but the slide will have to be moved because there needs to be 100 inches of space when the child comes off the slide.

The playhouse had a couple of issues, with the first being that it wasn’t handicap accessible. That issue could be fixed with the addition of a ramp. The monkey bars will have to come off because with a ramp there, it presents a danger that a kid will run into them. Some one-inch slats will have to be placed on the sides to prevent children from getting stuck between the boards.

They are also looking at removing several inches of dirt and pebbles and replacing it with rubber mulch so children don’t get hurt if they fall of the playground equipment.

The news didn’t sit well with Mayor Larry McDaniel, Councilman Jay Sherman and Vickie McDaniel, the president of the Coal Grove Betterment Club. They, along with Police Chief Eric Spurlock, met with insurance adjuster Greg Hencke, at Paul Porter Park on Thursday morning as he went over the park’s playground equipment and make suggestions as to what actions the village could take to make sure that kids didn’t get hurt while playing and to limit the liabilities if the village got sued.

Vickie McDaniel said it was breaking her heart to see that some of the equipment would have to be removed.

The Betterment Club is having its annual rummage sale March 2 at the Jay Rousch building. And she said they will also be selling hotdogs, chips and drinks to raise more money.

“We’ve talked about having a spaghetti dinner,” Vickie McDaniel said.
But the club also needs to use their funds for their annual Family Fun Days in the summer.

“So, we can’t just spend all the money that the Betterment Club has,” she said. “I’m sorry that this happened, but it is probably for the best.”

Mayor Larry McDaniel said evidently the insurance adjuster told someone about the situation four years ago but that information didn’t get passed on to the administration.

“This is the first time I had heard about it,” he said.

He said they definitely don’t want kids getting hurt in the park.

“So, we’ve got to do what we’ve got to do to stay in compliance,” he said, adding the park is closed until warmer weather anyway, but if the playground equipment isn’t upgraded by spring or summer, they would just block it off so the kids couldn’t get on it. People would still be allowed to use the shelters for picnics.

“Hopefully, we will be able to get this done by April or May,” he said, adding he would be contacting some local businesses to see if they could help out with paying for new equipment and repair costs.

Councilman Sherman said their goal is to get the park compliant because they don’t want any children injured.

“We want kids of all ages to have fun and if something is wrong, we want to fix it,” he said. “That is exactly what it comes down to. We just have to do some updating and make things safe again. Then, we will be fine.”

Upper Township VFD to have chili event on Saturday

The Upper Township Volunteer Fire Department will have its annual chili cook off on Saturday. Set up is at 9... read more