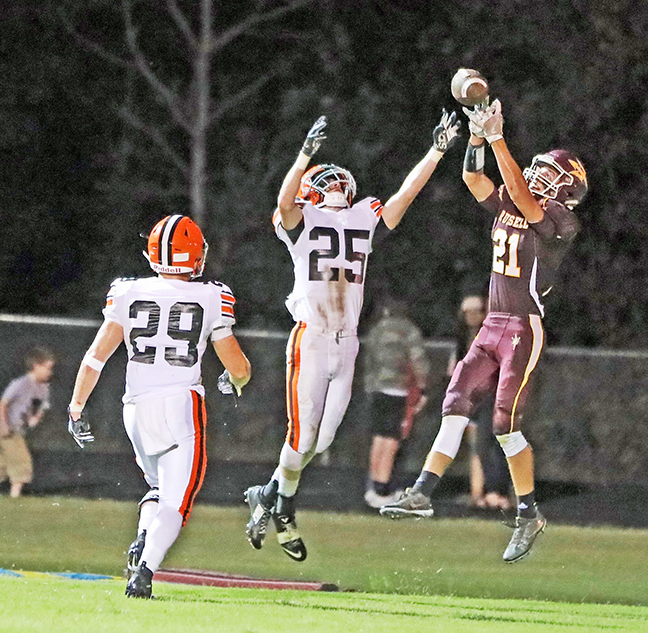 Ironton FIghting Tigers’ defensive back Collin Freeman (25) goes into the air to break up a pass against Russell last week. Ironton’s secondary will be tested this week against Fairland quarterback Joel Lambiotte. (Photo Courtesy of Tim Gearhart)

It could be called the “DNA” game: Can the Defense Negate the Arm?
That is the question posed this week as the Ironton Fighting Tigers’ defense goes up against the Fairland Dragons and senior quarterback Joel Lambiotte.
Fairland is 2-0 coming into the Ohio Valley Conference game mainly on the strength of Lambiotte’s right arm.
The 6-foot-2, 190-pound senior is 30-of-47 on the season for 601 yards and 10 touchdowns with just one interception.
After a 42-0 win over Tolsia in the opener in a game Lambiotte threw six TD passes, Lambiotte was 20-of-36 last week for 272 yards and four touchdowns. He also ran 42 yards for the Dragons’ first touchdown.
Of course, the Dragons have plenty of offensive weapons that include running back Michael Stitt and receivers Reilly Sowards and Gavin Hunt.
Fairland won last year’s meeting 27-21 on a 28-yard pass from Lambiotte to Sowards with three seconds to play.
Ironton is 1-1 after a 28-6 loss at defending state champion Wheelersburg in the opener and then bouncing back with a strong defensive effort in beating Russell 16-7 last week.
The Fighting Tigers have allowed 511 total yards with only 199 coming on the ground.
Wheelersburg was limited to 103 rushing yards and had to take to the air where Trent Salyers was 15-of-21 for 212 yards thanks mainly to three big gains of 52, 31 and 30 yards.
Ironton’s offense has been inconsistent due mainly to penalties. The Fighting Tigers have 402 total yards with 316 coming on the ground.
Sophomore running back Reid Carrico (6-2, 205) leads the team with 36 carries for 245 yards and a 6.8 yards per carry average.
He is joined in the backfield by junior fullback Seth Fosson (6-1, 225) who is not only a power runner but a strong blocker.
But it is Ironton’s defense that has been its forte and will face a tough test, especially the secondary of Brycen Thomas, Gage Salyers, Ayden Barnes, Jordan Grizzle and Collin Freeman.
Senior Ethan Duncan leads the linebacking corps that includes Dalton Crabtree, Cameron Deer and Carrico.
A major key for the Dragons will be the offensive line Jacob Rankin, Seth McLain, Logan Hamlin, Caleb Mullins, Kyle Rankin and Tevyn Andrus.
Fosson anchors the defensive line along with Gunner Crawford, Hunter Humphreys, Brady Rowe and Labe Griffith.
Kickoff is 7 p.m.