Cook honored for 45 years of service to track, cross country 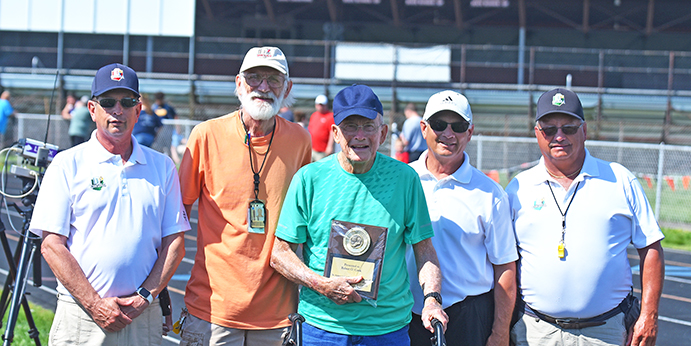 Long-time track and cross country official Bob Cook was honored for 45 years of service in high school and middle school officiating. Cook — who is retiring at the end of the season — was presented a plaque for his service prior to the Ohio Valley Conference track and field meet on Saturday at Ironton. From left to right, official Rusty Marcum, Ironton coach Greg Cronacher, Cook, official Mike Whitley and official Dave Lockhart. (Kent Sanborn of Southern Ohio Sports Photos)

When you say the name “Bob Cook,” there are usually five words that follow.
Track and cross country legend.
With 45 years of work in Lawrence County and the state in track and field along with cross country, Cook was honored prior to the Ohio Valley Conference for his years of service and dedication.
Cook will retire as an official at the end of this season.
It is somewhat ironic that Cook has had such a long and distinguished career in track and cross country.
Cook — who graduated from Cameron (W.Va.) High School in 1952 — said his high school only offered football, basketball and baseball. He added that there weren’t any sports for the female students.
“That tells you how things have rotated around,” said Cook.
His high school basketball coach began doing some track by utilizing the football field and putting in a sawdust pit that was standard at the time.
“We went to Shadyside and a few other places. (Track) wasn’t nearly what it is now,” said Cook.
Mike Whitley is currently a track official who had an outstanding career as the Fairland High School track coach. Whitley is the one who approached Cook about starting track at Fairland.
“Mike Whitley was the main one who got me involved,” said Cook who spent many nights with pre-meet entry sheets and times spread all over the dining room table while his wife, Betty, just shrugged it off as another part of the job.
For the past five decades that Whitley has been associated with Cook, he said Cook has made himself endearing to the lives he has touched.
“He was the guidance counselor and I was starting junior high track. We needed help. Bob helped. Bob was one of the founders of the officiating association that we have here,” said Whitley.
“Bob takes away the people that he’s met and the relationships he’s established with the kids over the years as his true rewards.”
Whitley said working with Cook has not only been a great friendship, but a learning experience as well.
“Bob started when I started in the 70 …. a long time ago,” said Whitley with a laugh.
“He’s been a huge part of track. Bob and I have talked about it over the years. Working with Bob is an education. Teaching, coaching, officiating, he’s always been about kids.”
Cook has not only worked local, district and regional meets but eight state track meets as well. But Cook said he can’t really single out one thing.
“It’s hard to put down one think but I’ve dealt with a lot of different kids — and not just Fairland kids. There are a lot of really, really excellent kids around and not necessarily athletes,” said Cook.
“I’ve got to know a lot of kids. Seth Miller’s sister Camryn at Rock Hill and I have a good friendship. Of course, Seth is a kid I’ve really liked working with along with his dad (Mark).
“But there’s a lot of good kids. You want to see a lot of good kids? Come to a cross country meet. They’re kids who are dedicated. They’re good kids. It takes a dedicated kid to run cross county and to get the mileage in during the summer.”
Cook has enjoyed his time with the athletes, coaches, other officials and especially his daughter Anita who ran track for Fairland.
But he said there has been one thing that has been a thorn in his career.
The weather.
“The one thing I don’t like about cross country and track is the cotton pickin’ weather. I’ve done meets in rain, snow, real hot temperatures. But you do what you need to do and don’t worry about it,” said Cook.
And he’s done it without worries for 45 years.