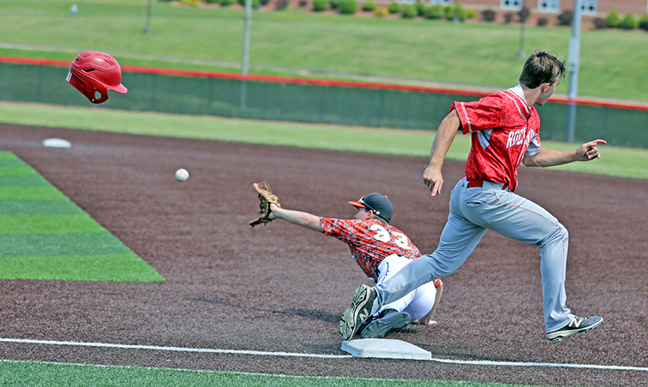 Rock Hill’s Brayden Friend (right) beats the throw to first base as Ironton Fighting Tigers’ second baseman Cameron Deere (33) covers the bag on the bunt play and stretches to try and get the out. The play was in a six-run third inning that helped the Redmen get past Ironton 6-3 in the Division III sectional tournament finals on Saturday. (Photo Courtesy of Tim Gearhart)

PEDRO — Each team did their damage in just one inning.
The Rock Hill Redmen just a little more like Mr. Mayhem from the All-State commercial.
The Redmen rode the pitching of Cody Lewis and a six-run third inning to hold off the Ironton Fighting Tigers 6-3 on Saturday and win the Division III sectional championship.
Lewis gave up five hits and used 99 pitches — 71 for strikes — to get nine strikeouts and one walk.
Only two of the runs were earned.
“Other than the one inning, we played well. But give Ironton credit. They put the ball in play and batted at the plate,” said Rock Hill coach Barry Litteral.
“I thought Cody pitched really well. He battled. He made the pitches when he had to. Cody kept us in the game and he was able to hold them down except for that one inning. Other than the one inning, we played well defensively.”
The Redmen will play Portsmouth West at 7 p.m. on Thursday in the district semifinals at Paint Stadium in Chillicothe. West beat Paint Valley 10-3.
Ironton had a costly error and a misplayed ground ball that led to three unearned runs. The Fighting Tigers also left the bases loaded in the seventh.
“We misplayed a few situations in the third inning for their big inning. But we continued to keep grinding and made it real interesting in the later innings,” said Ironton coach Travis Wylie.
“We are proud of the way this team gradually came together to be a solid team at the end of the year. That shows leadership from our seniors: Brett (Ashley), Blank (Joel Blankenship), (Tanner) Bowles, (Gage) Butler and Garrett (Carrico). All of us on this team are proud to be Fighting Tigers.”
Rock Hill (16-2) got all its runs in the third inning. The Redmen had only two other runners reach second base other than in the third inning.
Brayden Friend singled to start the inning and stole second. Jake Blagg put down a sacrifice bunt that went for a fielder’s choice allowing Friend to score.
Seth Nichols then reached on an error, Lewis walked and Kaleb Kidd had an RBI single. Kaden France got a two-run single and Kyle Stanfield had a two-out, two-run double to cap the rally.
“France and Stanfield both had clutch hits,” said Litteral.
Ironton (7-12) got its runs in the fifth inning.
Blankenship and Ayden Barnes singled and then Reid Carrico reached on an error for a run. Gage Salyers followed with an RBI single.
Butler was safe on an error to load the bases and Garrett Carrico hit a deep fly ball to right-center for a sacrifice fly.
Lewis was able to strikeout the next two batters to end the threat.
Ironton threatened again in the seventh inning but failed to score.
Salyers walked and Ethan Duncan had a two-out single., Brycen Thomas was hit by a pitch to load the bases but Lewis got the next batter on a pop fly to end the game.
Kidd was 2-3 with two RBI to lead the Redmen. Landon Smith was 1-1, Stanfield was 1-2 while Blagg, France and Friend were 1-3.
Barnes was 2-2 for Ironton. Salyers 1-2, Blankenship 1-3 and Duncan 1-4.
Ironton 000 030 0 = 3 6 1
Rock Hill 006 000 x = 6 7 2
Brycen Thomas, Bret Ashley (4), Ryan Ashley (5) and Gage Butler. Cody Lewis and Kaleb Kidd. W-Lewis (K-9, BB-1, ER-2). L-Thomas (IP-3.0, H-5, R-6, ER-3, K-2, BB-2). B. Ashley (IP-1.0, H-1, K-2, BB-1). R. Ashley (IP-2.0, H-1, K-3). Hitting-Ironton: Gage Salyers 1-2 rbi, Ethan Duncan 1-4, Joel Blankenship 1-3, Ayden Barnes 2-2, Reid Carrico 1-1 rbi; RH: Jake Blagg 1-3 rbi, Kaleb Kidd 2-3 2-rbi, Kaden France 1-3 rbi, Landon Smith 1-1, Kyle Stanfield 1-2 2B 2-rbi, Brayden Friend 1-3.