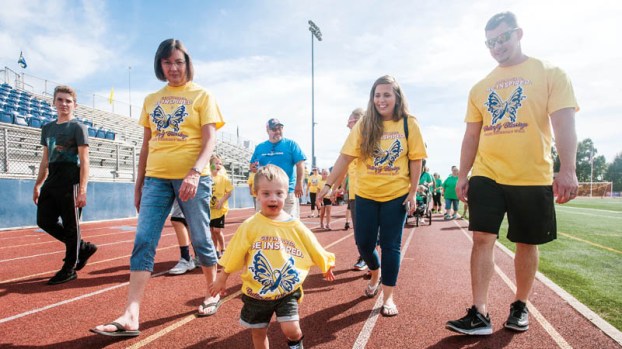 SOUTH POINT — People turned out at the field at South Point High School on Sunday to raise funds and bring awareness to a good cause.

The Butterfly Blessings Down Syndrome Walk took place on the track, and organizers said they were hoping to provide support to families in the area in need of resources.

The group Butterfly Blessings is newly-formed by Tina Erwin and Tara Tomblin and, in addition to three teams taking part in the walk, the event featured donated items for a raffle, a dunking booth, vendors, face painting, inflatables and other activities, raised funds for the group, which serves the Down Syndrome community in the Tri-State.

Erwin, whose son J.C. has Down Syndrome, said the main purpose is to create one-stop for those looking for help in the area.

She said, five years ago, there was not a community of support locally and that families had to go to places like Cincinnati or Columbus.

Down Syndrome, which is caused by an extra chromosome, can cause physical growth delays and moderate disabilities.

Tomblin, whose son Colton served as grand marshal of the event, emphasizes that it is not “a disease” and those with Down Syndrome do not “suffer” from it.

“We’re raising awareness for inclusion for kids with Down Syndrome,” she said. “Many people don’t understand what it is and don’t see the upside of it.”

Erwin said it is not something to hide or “be weary of.”

“They can work and learn, though sometimes in a different manner,” she said.

Erwin said the event was put on with help from A&L Home Care and Collins Career Technical Center, along with donations from several donors. She wanted to give a special thanks to Lawrence County Commissioner DeAnna Holliday, and her business, Holliday’s Quick Stop, which served as a platinum sponsor for the event.

Five of 12 candidates invited attended BURLINGTON — The general election in Lawrence County is set for Nov. 7 and,... read more