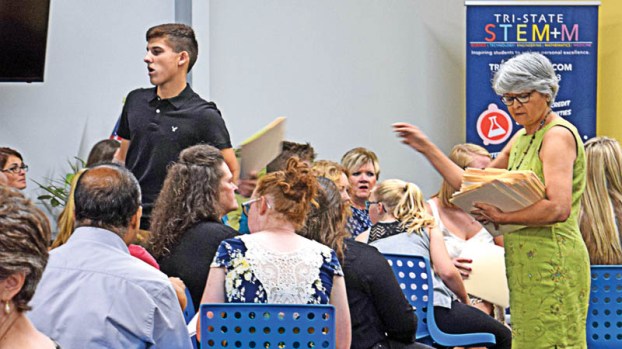 New school has much to offer

Director Jayshree Shah handed out folders with paperwork and schedules while lead teacher Alicia Spears went over previous school records with new students to determine their academic needs and schedule for the coming year.

Spears explained to students and parents that aptitude testing in the first week would help further fine-tune their academic schedule.

Once everyone was present, Shah went over the contents of the folder with the crowd, explaining what forms parents and students would need to fill out, sign and return before leaving that evening.

In addition to the typical medical forms, academic calendar, dress code and lists of necessary school supplies, the packet included a commitment letter, Shah explained, detailing what the parents and students could expect from the school, what the school and parents expected of the students, and what the school expected of parents.

Among those expectations were five hours of volunteer work per semester from parents with children in the school.

The packet also included paperwork for registering for the ACT, something that Spears encouraged parents to consider, especially if they planned on taking classes for early college credit.

“I know it’s early,” Spears said, acknowledging the age of the students, mostly freshmen with a few sophomores, but, she explained, if the students wanted to earn college credit, it was more useful that the placement exams of individual universities, which are often exclusive to their organization.

Following orientation, students walked through their schedules, getting time with their teachers and figuring out where they would need to go each period, while parents filled out forms and participated in break-out sessions dedicated to discussing students’ allergies or medical needs, as well as taking the ACT and participating in classes for college credit.

While talking with their new students, teachers introduced themselves and told the students a little about their backgrounds while also emphasizing the role of practical application in their classes. Math and computer teacher Benjamin Larrabee, for example, told students about his experiences designing mobile apps while promising that their focus will be on the application of mathematics.

“Everything we go over in here,” he said, “will be something you can use in the real world.”
Classes at the STEM+M Academy begin Aug. 14.