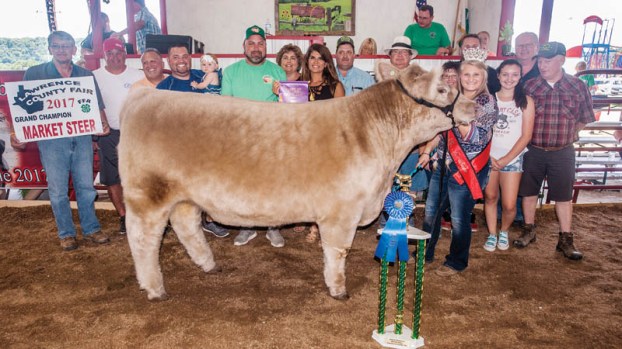 Lawrence County Fair comes to end with the sale of animals

ROME TOWNSHIP— Saturday was the final day of the Lawrence County Fair, which also meant that it was the day all the animals were auctioned off to the highest bidders in support of the county 4-H kids who raised them.

“It’s good for our local businesses to support our youth by purchasing the 4-H projects at the fair because it provides a reward for those kids who have invested a lot of time in the project,” Lawrence County Commission President Bill Pratt said.” Much of the time the 4-Hers will turn right around and invest back into the local businesses by purchasing their school clothes and supplies, or even a car if they’ve saved their money over the course of a few years.”

The first animal auctioned off were the lambs, with grand champion Hayley Pancake, of the Symmes Valley FFA 4-H club, bringing her 143-pound animal to the show area for bidders.

The winning bid came in at $10 a pound by Rich Donohue, Chris Donohue and Cameron Donohue, of Rax of Ironton and Central Hardware.

The next hog shown was that of reserve champion Jason Lewis, of the Willow Wood Wranglers 4-H club, which also totaled 276 pounds.

The winning bid for the reserve champion came in at $12 a pound by Riverside Recovery Services, Chesapeake Auto Center and Jim’s Termite Pest Control.

Commissioner DeAnna Holliday said it’s very important to her to support the 4-H kids through the fair auction.

“Supporting the kids of 4-H allows me to invest in their future and the future of Lawrence County because I believe they are the future leaders of this county,” she said. “I spend the week getting to know them and understanding the goals they have in their lives. I try to support them more than financially. I want them to know how great they are and how their accomplishments and hard work can lead them to a bright future. I encourage them every way that I can.”