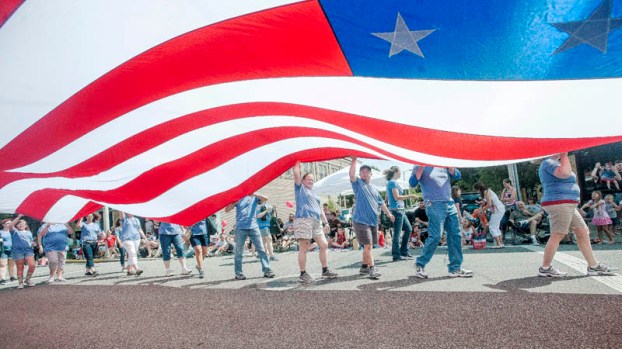 Members of Our Lady of Bellefonte Hospital carry an American flag during the Ironton-Lawrence County Memorial Day Parade on Monday.

Parade celebrates communities, honors those who paid the ultimate price

Memorial Day is about remembering those who gave the ultimate sacrifice for their nation, but Memorial Day parades are a little different. Like many things we do in our communities, they have a lot to do with our children. With educating them as well as entertaining them.

Eric Day, who was participating in the parade as a Shriner Hillbilly said that the kids are the reason the members of the El Hasa Shrine get involved with events like the parade.

“It’s all about the kids,” said Day, who has been a Shriner for ten years and marched in the parade for the last eight years. “Putting a smile on a kid’s face… that’s what Shriner’s do.”
Erica Brown brought her three daughters down to enjoy the antics of the Shriners, but also to teach them a lesson about the sacrifices that others have made to guarantee their right to enjoy events like the parade and family cookouts.

Brown, who said she’s “come since I was a kid,” said she has continued that tradition by bringing her children each year.

“I love them to see what Memorial Day is all about,” Brown said. “See who served our country.”

She said they just completed a celebration of America as part of their elementary school graduation, so it was a nice correlation to what they were experiencing today.

Ironton Mayor Katrina Keith said the experiences of folks like Brown weren’t uncommon, and that the Memorial Day Parade in Ironton held a special place in the hearts of the people of Lawrence County.

“The Memorial Day Parade is not just a holiday celebration,” Keith said. “It’s the very fabric of Ironton and Lawrence County. It’s about family, and coming home, and also economic development. People who come home stay in hotels, eat at restaurants, and our local business is able to capitalize on it.”

But she doesn’t want to give the impression it is just about business and money. As she explained, it’s “the very fabric” of the community.

“It’s a staple in our community,” she said, “because we honor those that have defended our inalienable rights, with their very lives. It doesn’t go unrecognized.”

Cody Sloas and Aaron Dillon, of the Goblin Traders comic book and game store on Center Street, embodied that community spirit during the parade as well. The duo, who just purchased the store two months ago, continued a tradition started by the previous owner, putting out folding chairs and erecting a canopy in front of their business so that those viewing the parade could have a shaded place to sit. They also handed out goody bags with free comic books to children passing by.

“We figured if anyone wanted to sit, they could feel free,” said Sloas. “Strong community events like this build small businesses, and if we can give back, it helps everyone.”

The parade itself reflected the pride and dedication of the communities of Lawrence County also, featuring government entities, elected officials and first responders as well as businesses, civic and charity groups, and schools from each. But while it was fun, as parades should be, there was never any doubt about the meaning behind the day.

From the American Legion’s 21 gun salute and taps ceremony, to the parade floats honoring fallen heroes from all of our nation’s wars and conflicts, there could be no doubt in anyone’s mind that the reason the community was able to gather and celebrate in this way was due to the ultimate sacrifice paid by the heroes the community came out to honor.