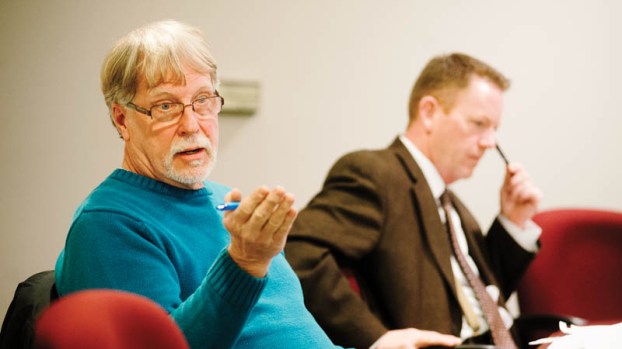 Ironton firefighters showed up at a special meeting of the Ironton City Council on Thursday night to show their support for an ordinance that would increase the city’s fire fee and help three firefighters keep their jobs.

Normally, the city council only meets on the second and fourth Thursdays of the month, but with a budget due by May 1, they have held additional meetings by both the finance committee and the council to get the budget adjusted for approval.

The finance committee voted favorably to send ordinance 17-11 to council.

The city first enacted a fire safety fee in 1995 and has amended it four times since then. This amendment would raise the fire safety fee, from the current rates of $4.75 per month for household and $12 per month for businesses, by $2.15 to $6.90 for residences and $14.15 for businesses. If passed, it would take effect on May 1. The increase would generate approximately $116,500 annually. The money is to be “used exclusively for capital improvement, manpower, and the necessary operating expenses of the Ironton Fire Department” according to ordinance 17-11.

The council meeting began with Vice Mayor Craig Harvey notifying the crowd that only at regular meetings is the public allowed a comment period.

Then the council heard a prayer and then had a moment of silence for Councilman Dave Frazer.

“He passed away after battling long-term illness,” Harvey explained.

After the moment of silence and the Pledge of Allegiance, the council clerk gave second and third reading to the amended budget ordinance. It gave the fire department its full budget.

They gave the first reading to the fire safety ordinance.

“The council wanted to give that, just like wastewater, three separate readings so people have a chance to say their piece,” Harvey said when Mayor Katrina Keith asked if she could speak on the fire fee and was told no.

There will be a second reading at next week’s regular council meeting.

Five council members voted for the ordinance and Harvey voted against it.

Even though he couldn’t address council this week, Aaron Collins, an Ironton firefighter and president of International Association Firefighters union Local 532, said he was glad to see the fire safety fee on the agenda.

“I was very pleased to see this go before council,” he said. “It means we have come a long way in keeping our three men. And hopefully, the city continues to move forward in the right direction and we can bring back the income tax, and the AFSCME employees, and FOP employees. As far as keeping my three men, I’m very excited and very pleased.”

Collins said he and other supporters would be at the next two meetings.

“Until we see it through, we will be here,” he said.

The next Ironton City Council meeting is on Thursday, March 23 at 6 p.m. in council chambers on the third floor of the Ironton City Building.