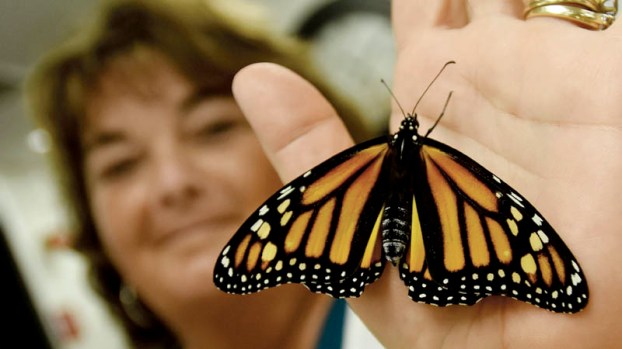 For 20 years, the seventh graders at Rock Hill Middle School have taken part in a monarch butterfly project in conjunction with the Entomology Department at the University of Kansas through monarchwatch.org.

The project entailed collecting chrysalises, eggs and caterpillars from milkweed plants, raising them, tagging them and finally releasing them into the wild.

For the first time since the project began at the school in 1996, one of the monarch butterflies tagged at Rock Hill Middle School was discovered. The butterfly, tagged UHP519, traveled 2,456 miles, where it was found in El Rosario, Mexico.

“We order little sticker tags on the website, which we put on the underneath side of the hind wing,” seventh grade science teacher Kathy Gore, who’s in charge of the project, said. “Last year, we released 11 butterflies on Sept. 11, and the students gave them all patriotic names. Our butterfly was discovered on March 6 of this year.”

On each tag contains a phone number and email address, which can be contacted if discovered.

“Monarch Watch does a posting of tag recoveries, and I compare that with our data sheets to see if any of ours were found,” Gore said. “This was the first one of ours found since we started doing this project.”

Gore said the population of monarch butterflies varies year to year, but this year has been very low.

Teacher Denise Fraley, who taught seventh grade science from 1996-2003, started the project before Gore took it over.

Service to honor cemetery founders ROME TOWNSHIP — A service on Sunday is planned for the public to mark 100... read more