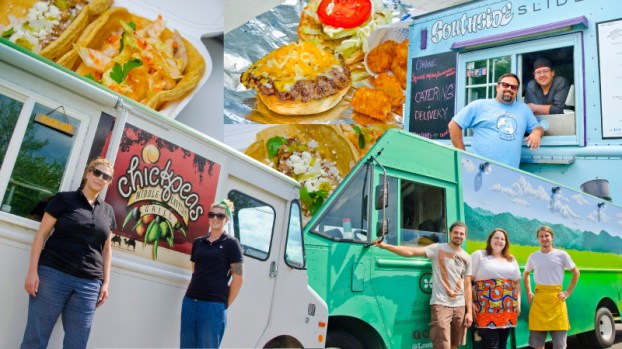 Over the past few years, enjoying a meal served from a window on the side of the street has become just as popular as ordering from a sit-down restaurant and in most cases, just as or even more tasty. These mobile restaurants, or food trucks, as they’re more commonly known, offer a variety of cuisines ranging from American burgers and sandwiches to farm-fresh, worldly-inspired ethnic dishes.

The Tri-State is now taking hold of the trend.

The idea behind Heirloom Mobile Kitchen could be summed up in seven words: make the most of what is available.

“Everything is locally sourced,” owner Tyler Wade Smith said. “You won’t find anything on our menu that isn’t.”

While that might mean having to take the time to find alternatives to certain ingredients or having to preserve or can produce that is out of season, it also means fostering connections with local farmers, and thus, contributing to the local economy.

“Heirloom is deeply rooted in the community,” Smith said. “These are my friends, and these are the people I want to buy my food from.”

Smith, a Huntington native who has worked in restaurants locally, moved to Los Angeles to become an actor. While there he workd for Love Catering.

“It set the bar for the high standard and service that we want to provide,” he said.

But the need for shoulder surgeries and physical therapy brought him home. Smith, along with friends Kelly Dial (chef/manager) and Stuart Dustin Gore (chef/sourcing), launched Heirloom in October.

“This truck is not my truck,” Smith said. “It doesn’t work without my staff.”

Smith hopes Heirloom will help continue the mission that Jamie Oliver started in Huntington years ago, trying to educate the importance of local, fresh, healthy living — and the knowing where our food comes from.

“The people who are growing our food deserve our support,” Smith said.

When an injury left her unable to hold a traditional 9-to-5 job, Trace Jeffrey knew she needed to find an alternative source of income that was both flexible and fulfilling. The idea of a food truck, which was gaining speed around the country, seemed to fit the bill. Jeffrey started Chickpeas, a mobile restaurant specializing in Middle Eastern cuisine, in 2014 with her friend Sinaya Dayan.

“Sinaya has a full-time job and also helps me with Chickpeas,” Jeffery said. “Without her, I would have been so lost.”

Although she had an interest in cooking prior to the venture, Jeffrey credits Dayan for truly expanding her kitchen knowledge.

“She started teaching me about food and created a monster,” Jeffrey joked. “Sinaya has an extensive culinary background. She was born in Israel and started learning at a very early age.”

It was during a trip to Israel that Jeffrey fell in love with Middle Eastern fare.

“I felt like I had tasted food for the very first time,” Jeffrey said. “My tastebuds were dancing with every bite. No matter what I tasted, it was delicious. I couldn’t leave my experience behind; it needed to be shared. So it was a must for me to bring these flavors back to Huntington where I knew it would be appreciated.”

At Chickpeas, customers can order an assortment of items like falafel wraps, kebabs, hummus and tabbouleh.

“Everything is made from scratch and to order,” Jeffrey said. “We try to cater to vegans and much as we cater to meat-lovers.”

The chicken schwarma, one of Chickpea’s signature dishes, was drawn directly from a man Jeffrey met in Israel.

“I chased the same guy for four years to get his shawarma recipe,” she said. “He finally gave in to me.”

This year marks Chickpeas third season. There have been struggles — mechanical issues with the truck and trying to balance all of the responsibilities that come from running your own business — but Jeffrey is looking forward to the future.

“After all of the hurdles we have jumped over, we are still rollin’, so we must be doing something right,” she said. “I have a wonderful team that makes everything happen. They have helped make my dream of Chickpeas come true.”

Chickpeas runs seasonally in the late spring and summer from 11 a.m.-2 p.m. Monday through Wednesday (often at 412 Eighth St., across from the courthouse) and from 4-8 p.m. Thursdays and Fridays at Heritage Station. Find them on Facebook – www.facebook.com/ChickpeasWV, Twitter – @ChickpeasWV, Instagram – @ChickpeasWV and /www.foodtrucksin.com/chickpeas.

Like a lot of people in the Tri-State, Jason Webb grew up going to Victor’s, a former delicatessen on Eighth Street in Huntington. The experience had such an effect on him, that Webb fantasized of opening his own sandwich shop one day. But it wasn’t until last October, when he was laid off from his medical sales job, that Webb decided to recruit his friend, Michael “Special” Williams, and make that dream a reality.

“We make simple and unique sliders and tots,” Webb said.

The most popular order, the Pony Express, is a teriyaki pork tenderloin on a King’s Hawaiian roll with Swiss and mayo. There’s also the Greek, a “slider version of a gyro” composed of a lamb burger, Greek olives, feta, Tzatziki sauce, lettuce and onion. Sliders range from $3 to about $4.50.

“We have a set menu of seven sliders, but we’ll had a couple of special ones here and there, like for the holidays we did a Thanksgiving one,” Webb said.

As for the tots, you can get them plain, with cheese or chili cheese-style.

Southside Sliders might only be a few months old, but the response has been so overwhelmingly positive that Webb is planning on hiring more staff and taking on more catering events.

Southside Slides regularly serves lunch from 11 a.m.-2 p.m. Tuesday and Thursdays at 528 Eighth St., near the Cabell County Courthouse and U.S. Army Corps of Engineers, Wednesdays at Cabell Huntington Hospital. Fridays are flexible. The truck also serves late-night diners from 12-3 a.m. at the Keith Albee. Find them on Facebook at www.facebook.com/southsidesliders, Twitter – @SoSideSliders and Instagram – @SoSideSliders.

Appalachia Barbecue – Brian Fridley’s truck, known for its smoked meats and homestyle side dishes, has been out of commission since a fire destroyed his barbecue shack and smoker in February. Fridley has a GoFundMe page (www.gofundme.com/57u6q83m) set up for people give donations to help rebuild and obtain the equipment needed to pass inspections, but there haven’t been any updates since April. Find them on Facebook at www.facebook.com/AppalachiaBarbecue.

Grindstone Coffee – This new truck popped up over Memorial Day weekend in Huntington’s Southside neighborhood. Ran by Brendan and Helen Feen, “Aussies living in Huntington,” the mobile espresso bar has lattes, cappuccinos, chais, hot chocolate and a “Flat White” (a single or double shot of espresso topped with microfoam). Find them on Facebook at www.facebook.com/Grindstonecoffeeology and Instagram – @grindstonecoffeeology

Turning passion into a career

Summit Beer Station and Bonded by Bottles offering an eclectic selection of brews in Huntington Jeff McKay was listening to... read more