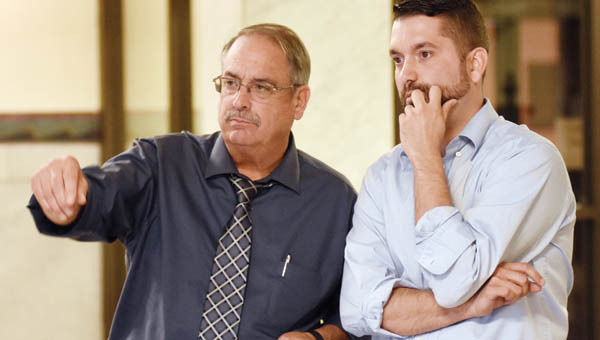 One incumbent lost and the other still remains a viable candidate.

In the race for the seat now held by Lawrence County Commission president Les Boggs, newcomer Christopher Collins won the GOP nomination. He will face off against Coal Grove businesswoman DeAnna Holliday, who was running unopposed on the Democratic ticket.

Collins was running against Boggs trying to retain his seat and former Ironton Mayor Rich Blankenship. Collins started out with a lead in the absentee votes at 819 absentees. Boggs had 659 in absentees with Blankenship pulling 615.

After that, Boggs trailed in third place; twice Blankenship almost overtook Collins. Once, with 37 precincts counted, when Blankenship was only behind by 31 votes. The next time was with 76 precincts, when he was behind by 36 votes. But for the rest of the evening, his losing margin was between 120 and 150. Collins took his greatest lead when Fairland East, the last precinct to come in, gave him an unofficial total of 4,201 to Blankenship’s 3,801 and Boggs at 3,546.

Holliday pulled an unofficial total of 3,375.

The other commission seat up is held by Bill Pratt, who faced a social media campaign on the Republican side conducted by former Ohio University Southern professor Dave Lucas.

Pratt took the lead with 993 absentees to Lucas’ 860 votes. But he soon lost that when 19 precincts were counted when Lucas took an almost 400 vote lead. Lucas kept his lead until four precincts had yet to come in — Deering, Burlington, Chesapeake Community Center and Fairland East. Three of those cut Lucas’ lead to 33. When Fairland East came in, that lead was knocked down to just 15 votes in favor of Lucas. Final vote was Lucas at 5,447 and Pratt at 5,432.

With more than 200 provisionals yet to be counted and a possible recount, the results of that race could reverse.

Whoever wins that GOP primary will face former commissioner Doug Malone who took the lead on the Democratic side from the start and never stopped. Malone was running against businessmen Tim Edwards, Jon Ferguson and Jason Tolliver. For the first precincts, Edwards held second place, but finally lost that to Tolliver. Final tally was Malone at 1,494; Tolliver at 1,247; Edwards at 1,043 and Ferguson at 740.

One of the biggest Republican primaries in recent county history brought out 12,558 votes to 5,031 on the Democratic ticket. At least 20 polling places ran out of Republican ballots and the board of elections had to print more and get them to the precincts.

“That is a massive amount,” Mark McCown of the BOE, said.

A lot of those were thought to be Democrats who were crossover voting in the Trump-Kasich race. While Kasich took Ohio, Trump won Lawrence County getting 47 percent of the vote.