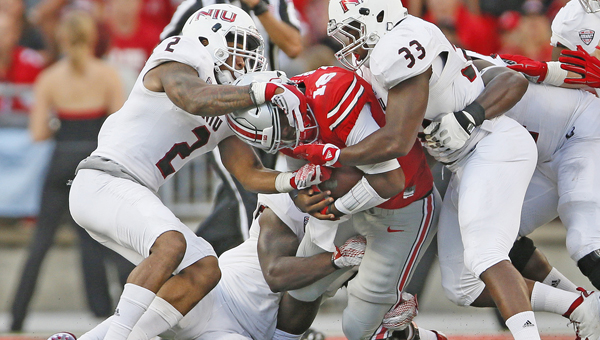 Ohio State Buckeyes’ quarterback J.T. Barrett (16) will forfeit his summer financial aid as part of his penalty for being arrested early Saturday morning on an operating a vehicle while impaired charge. Barrett has also been suspended for this Saturday’s game against Minnesota. (Adam Cairns/Columbus Dispatch/TNS)

COLUMBUS (AP) — Ohio State quarterback J.T. Barrett will forfeit his summer financial aid as part of his punishment for being cited for operating a vehicle while impaired.

Barrett was cited for the misdemeanor early Saturday morning by Columbus police and suspended one game by coach Urban Meyer.

Meyer said Monday that Barrett, who turns 21 in January, came to his home Saturday to apologize for his run-in with the law.

“I told him that’s the toughest thing you’ll have to deal with,” Meyer said. “Now there are questions (about) who you are. He’s never had to deal with that. How do you deal with 20 years of doing right and 30 seconds of doing wrong, or three minutes, or whatever it was? That’s real life.”

Meyer handed out a similar financial-aid punishment in 2012 when offensive lineman Jack Mewhort and tight end Jake Stoneburner were arrested on misdemeanor charges.

Barrett will sit out this week when the top-ranked Buckeyes play Minnesota at home. Cardale Jones, who started the first seven games of the season, will start in Barrett’s place.

“Cardale had a great week of practice last week,” Meyer said. “He’s engaged. He handled it like a man.”

Meyer also said Barrett might be given the chance to regain his starting job when his suspension is lifted for the game at Illinois on Nov. 14.

“If he’s good enough and if he’s earned that right,” Meyer said. “I haven’t even gotten that far yet.”

Braxton Miller, the former quarterback who moved to receiver this season after shoulder surgery, will be the Buckeyes’ No. 2 quarterback this week.

“We have to address the strengths of Cardale and make sure we have a good game plan that fits his strength and bring along a package with Braxton Miller as a backup quarterback,” offensive coordinator Ed Warinner said.

Meyer said he spoke with team leaders about stripping Barrett of his captaincy. The players said Barrett should remain captain, but Meyer is still considering a change.

Offensive lineman Taylor Decker said Barrett called him Sunday to apologize and that Barrett spoke to the entire team Monday.

“While his act was selfish, right now he’s taking a selfless approach to it,” Decker said. “That’s important. Even though it’s about him, he’s trying not to make it about.”

Ohio State did not play last Saturday and the leadership group among the players stressed the importance of staying out of trouble. Decker would not say if Barrett was one of the leaders who addressed the team.

But Decker was stunned when he heard the news about Barrett.

“That’s a great word for it,” Decker said. “We haven’t really had a ton of issues this year and the bye week, I thought we made it clear that we shouldn’t have any. Then to have it from a guy like him, that’s a perfect word for it.”

Decker said he was angry with Barrett.

Meyer learned of the Barrett’s problem via a text at 6 a.m. Saturday.

“I actually called the person who texted me and asked, ‘Did I read this right?’ “ Meyer said.

Meyer said Barrett told him he did not believe he was impaired.

This is the second time in 11 months that Barrett has been involved in a situation requiring the police. He and an ex-girlfriend both called the Columbus police in December over a domestic dispute at his apartment, but no charges were filed.

Meyer said he talked to Barrett afterward about his responsibilities and status as an Ohio State athlete and that the latest incident does bring into question Barrett’s judgment.

Warinner said Barrett still has the backing of the team.

“He did something that hurt himself and hurt our football team, but everybody gets a second chance in life so we’ll move on,” he said. “How do I view him? He has a lot of banked credibility for what he’s done prior to that. Now he’s got to repair that credibility to the player and coaches, which he is in the process of doing.”