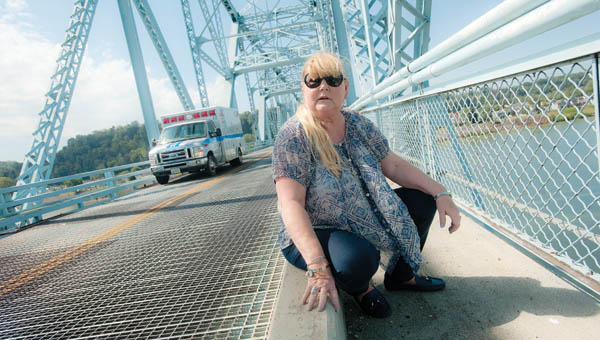 Ironton resident Elle Dew is on a mission to save the Ironton-Russell Bridge. The bridge is the last of its kind in the country.

Preserving the 93-year-old Ironton-Russell Bridge is something that Ironton resident Elle Dew has decided to put on her shoulders with a petition that she started less than three weeks ago, which has already gained more than 800 signatures.

Currently, part of the contract with the construction company building the new bridge is to demolish it.

“This is the last bridge of its kind in the country,” Dew said. “Do we need to destroy the only thing left of its kind?”

The bridge, built in 1922 by the Wisconsin Bridge and Iron Co., is the country’s last cantilever bridge with a suspended Baltimore truss span. Cable bridges became more popular in the late 20th century, according to historicbridges.org.

Dew said she came up with the idea to preserve the bridge for pedestrian purposes while taking a class at Ohio University Southern, where her professor told her to write a 500-word essay on something that interested her.

“I’ve driven on that bridge so many times. The more research I did, the more fascinating it became,” Dew said. “I then got permission to start a petition, the National Bridge Historical Society published the link to my petition on their website and I created a Save the Ironton-Russell Bridge Facebook page.”

Dew’s petition was started on change.org once all of the information on the bridge was verified.

The bridge was also the only bridge crossing the Ohio River between Cincinnati and Parkersburg, West Virginia, at the time it was constructed and was privately owned before the Ohio Department of Transportation (ODOT) purchased it for renovations.

Dew said she is planning on going to the main ODOT office in Columbus when she feels enough signatures are obtained for the saving of the bridge to even be considered.

“Saving the bridge is going to be rather challenging to move forward,” Kathleen Fuller, ODOT public information officer of District 9, said. “In the contract to construct the new bridge, it is also to destroy the old one. If there is interest from a group or someone who would want to take it over to preserve and maintain, there would be a significant cost.”

Fuller said that for now ODOT is going to continue to proceed with the contract that is written, although Dew is not worried about the contract, saying that it can be broken if enough is done about it.

“I’m taking this one step at a time,” Dew said. “I know there are a lot of things that need to happen including who would take ownership of the bridge, but right now I’m just worried about getting signatures. I want it to be impressive enough when I go up there.” Dew’s goal is 20,000 signatures for her petition, which has gained supporters from all across the country.

“I’m hoping to go to ODOT by December, but I will wait until I feel I have enough signatures and support,” Dew said.

The new bridge is not expected to be open until late next year at the earliest or early in 2017.

COLUMBUS (AP) — A nationwide push allowing schools to buy portable barricade devices they can set up if an active... read more