Manziel may be closing the gap on McCown 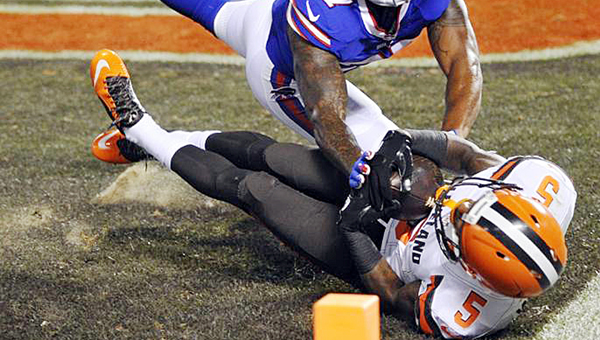 Cleveland Browns’ wide receiver Shane Wynn (5) catches a 21-yard touchdown pass from quarterback Johnny Manziel in the fourth quarter of Thursday’s exhibition game. Despite the play, the Buffalo Bills rallied to edge the Browns 11-10 on a two-point conversion with 1:31 to play. (Photo Courtesy of The Cleveland Browns.com)

EJ Manuel’s was even better for Buffalo.

Manziel threw a touchdown pass and maybe closed the gap on presumed starting quarterback Josh McCown before Manuel rallied the Bills to an 11-10 victory Thursday night.

Manuel, attempting to beat out Matt Cassel and Tyrod Taylor for Buffalo’s starting job, threw a 14-yard TD pass to Andre Davis with 1:31 left. He then connected with rookie Bronson Hill for the 2-point conversion to complete a late rally by the Bills (1-1).

Buffalo coach Rex Ryan said his QB competition remains open, and he will not name a starter until just before the season opener against Indianapolis. He doesn’t want to give the Colts any edge.

“We don’t need to tell them,” he said. “Until the league makes us tell them we can go right up there and say we’re not going to say anything. We may know. But why would we say any different?”

After Manuel’s TD pass and conversion, Manziel had one last chance, but he couldn’t pull off any magic as the Browns (0-2) dropped their second straight exhibition at home.

Manziel connected with rookie Shane Wynn on a 21-yard TD pass in the fourth quarter. Playing against Buffalo’s backups, Manziel finished 10 of 18 for 118 yards and made one of those Johnny Football plays — rolling left and completing a 37-yard pass — that made him an electrifying college star.

Following the game, Browns coach Mike Pettine reiterated that McCown, who threw interceptions on Cleveland’s first two drives, was firmly the No. 1.

“We’ll evaluate both guys,” Pettine said. “I’m not going to sit here and talk about trying to start up a quarterback controversy.”

Manziel said he’s happy to be on the field and he’ll leave the number of snaps up to Pettine.

“Would I like to be in there with the ones? Sure,” he said. “It’s not my call, and if that decision does come, I’ll be ready to hop in there. But for now, I’m making the most of the opportunities I’m getting.”

McCown did nothing to lock up the starting gig. He has not been named Cleveland’s Week 1 starter, and Manziel’s performance could further delay any decision.

“The things that stopped us were my mistakes,” said McCown, who went 7 of 10 for 57 yards and two interceptions.

Following the game, McCown underwent X-rays on his right ring finger. McCown said initial tests were negative, but that he may need more.

With the score tied 3-3, the Browns were backed up at their own 4 before Manziel, who played the entire second half, drove them to their go-ahead score. He completed 6 of 7 passes on the drive, highlighted by his 37-yard strike to rookie Darius Jennings.

Ryan said he rested Cassel to get a closer look at his two less experienced QBs.

Bills: Already missing Watkins, Percy Harvin and Robert Woods, Chris Hogan was carted off with an ankle injury in the first quarter, further depleting Buffalo’s receiving corps. Hogan covered his head with towel and placed his hands on his as he was driven to the locker room.

Browns: DB Jordan Poyer sustained a concussion while making a tackle. He briefly wandered into Buffalo’s offensive huddle before the Browns sent him for an evaluation.

Bills: A second-round pick from Florida State, CB Ronald Darby showed solid ball-hawking skills by intercepting two of McCown’s passes. He’s listed as a backup on the depth chart behind Leodis McKelvin, who is on the non-football injury list and expected to miss the start of the season.

Browns: Wynn, an undrafted free agent from Indiana, continued to impress. In addition to his TD, he had a 58-yard punt return that was brought back by a holding call. Also, DT Xavier Cooper had two sacks and massive DT Danny Shelton plugged the middle.