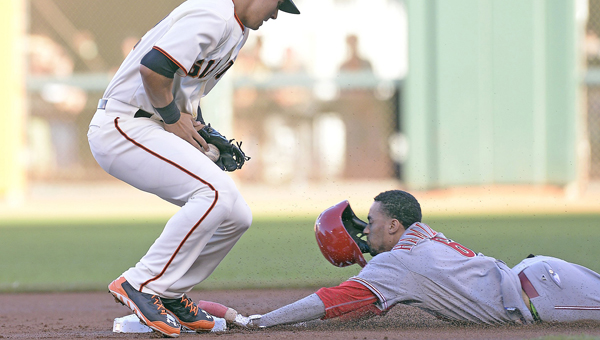 Cincinnati Reds’ outfielder Billy Hamilton (right) steals second base during a game at San Francisco this past season. Hamilton was second in the voting for the National League Rookie of the Year behind New York Mets’ pitcher Jacob deGrom. (MCT Direct Photos)

CINCINNATI — Being an everyday player didn’t carry enough weight for Billy Hamilton to overcome a pitcher.

Hamilton had four first-place votes, 23 second place and three for third place to give him a total of 92 points.

Kolten Wong of St. Louis was third with 14 points.

Hamilton was philosophical about finishing runner-up.

“I did some great things, I did some bad things. It’s always going to get better,” said Hamilton. “I had (rightfielder) Jay Bruce behind me who helped me through the whole year.

“I felt like I played well last year. It could have been better. You never know what’s going to happen next year, so I’m looking forward to next year. My off-season has been great. I still think I did a great job.”

Hamilton hit a slump after the All-Star break, much like the entire team. He hit .200 with a .254 on-base percentage and 25 runs scored.

“I love to steal bases, but to steal bases you have to get on,” said Hamilton. “That’s what really bothered me more this year — me trying to force myself to get on base and steal a base. I kind of got myself worried too much about getting on base and not getting a chance. If I get on base, (stealing) is a big part of my game. It’s what I love to do. It excites me.”

He also had 25 doubles, eight triples, 141 hits and 34 walks with 117 strikeouts in 563 plate appearances. He led all NL rookies in runs, hits, stolen bases, doubles, extra base hits and total bases.

Hamilton also made several outstanding defensive plays and led all NL centerfielders with 10 assists. He had a .994 fielding percentage.

While Hamilton had an impressive overall resume, the main focus has always been centered on his speed and ability to steal bases. Hamilton admits that is the favorite part of his game.

“I love to get on base. That’s what excites me. The fans are one of my big motivations of stealing bases,” said Hamilton.

“I get over there and all they do is yell at me ‘Go, go, go.’ I’m the type of player I can hear that stuff. I don’t block the fans out. They actually motivate me a lot. Those fans are Reds fans. They’re great. It’s fun. It’s great stealing bases.”

The last Reds’ player to win the NL Rookie of the Year award was reliever Scott Williamson in 1999. The last position player to win the award was third baseman Chris Sabo in 1988. Sabo was a NL All-Star that season and helped the Reds win the 1990 World Series.