Spurs prove too sharp for Heat 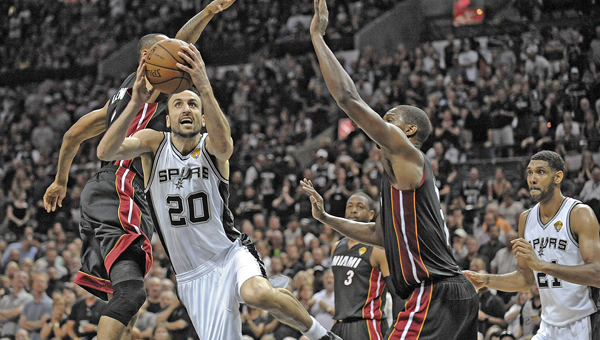 San Antonio Spurs guard Manu Ginobili drives past Miami Heat’s Rashard Lewis and Chris Bosh during the first half in Game 5 of the NBA Finals at the AT&T Center in San Antonio, Texas, on Sunday.The Spurs won 104-87 to win their fifth NBC title. (MCT Direct Photo)

SAN ANTONIO (AP) — From their low moment in the NBA Finals, back to the top of the league.

The San Antonio Spurs turned the rematch with the Miami Heat into no match at all.

The Spurs finished off a dominant run to their fifth NBA championship Sunday night, ending the Heat’s two-year title reign with a 104-87 victory that wrapped up the series in five games.

A year after their heartbreaking seven-game defeat, their only loss in six finals appearances, the Spurs won four routs to deny Miami’s quest for a third straight championship.

“Hard to believe, isn’t it? Manu Ginobili said. “We played at a really high level.”

Finals MVP Kawhi Leonard had 22 points and 10 rebounds for the Spurs, who added this title to the ones they won in 1999, 2003, ’05 and ’07. They nearly had another last year, but couldn’t hold off the Heat and lost the final two games.

San Antonio rebounded from an early 16-point deficit by outscoring the Heat 37-13 from the start of the second quarter to midway in the third, kicking off the celebration the Heat canceled last season.

“We remember what happened last year and how it felt in that locker room and we used it and built on it and got back here and it’s amazing,” Tim Duncan said. “It makes last year OK.”

LeBron James had 17 first-quarter points to help the Heat get off to a fast start. He finished with 31 points and 10 rebounds for the Heat, who lost their spot atop the NBA to the team that had it so long.

“They played exquisite basketball this series and in particular these last three games and they are the better team. There’s no other way to say it,” Heat coach Erik Spoelstra said.

The Spurs won four titles in nine years, but hadn’t been back on top since 2007, making Foreigner’s “Feels Like the First Time” an appropriate song choice after the final buzzer.

Duncan and coach Gregg Popovich have been here for all of them, and it was the fourth for Tony Parker and Ginobili, who with Duncan are once again the reigning the Big Three in the NBA.

“Just a great team and we do it together,” Parker said.

Chris Bosh finished with 13 points and Dwyane Wade just 11 on 4-of-12 shooting for the Heat, providing James nowhere near the help he needed.

The painful conclusion to last year served as the fuel for this one, powering the Spurs to a 62-win season that topped the NBA and led to a rematch with Miami, the NBA’s first in the finals since Chicago beat Utah in 1997-98.

Round 2 went to the Spurs, but both teams have challenges to navigate for a rubber match.

San Antonio will face questions — as it has for years — about the age of its core, and whether Duncan, Ginobili and Popovich want to stick around. The Heat will brace for the potential free agency of James, Wade and Bosh, and will need younger, fresher pieces around the three All-Stars if they all stay.

But this moment belongs to the Spurs. Playing a methodical style for many years that was predicated on throwing the ball into Duncan made San Antonio respected, but never beloved. The Spurs were TV ratings killers, casual viewers finding them not much fun to watch.

But Popovich opened up the offense a few years ago, making the Spurs an easy-to-like, tough-to-beat group that thrives on ball movement and 3-point shooting.

“You showed the world how beautiful this game is,” Commissioner Adam Silver told the Spurs during the postgame award ceremony.

A decade and a half after winning their first title in 1999, when Duncan was in his second season, the Spurs remain the NBA’s model organization, a small-market team that simply wins big and hardly ever does it with a high draft pick. Instead, they found players overseas or in other organizations who would fit the Spurs’ way of doing things and mesh with the Duncan, Parker and Ginobili, the winningest trio in postseason history.

That included Leonard, acquired in a draft-night trade with Indiana after playing at San Diego State, and Patty Mills, an Australian national who scored 17 points off the bench.

No team has overcome a 3-1 deficit in the finals, but the Heat were confident they could keep this season going, Bosh saying earlier Sunday that the Heat were going to win.

It appeared they would do it easily the way the game started, with James coming out with force on offense and shutting down Parker on defense as Miami went ahead 22-6.

But it didn’t last.

The Spurs eventually made it look stunningly easy again — much to the delight of the home crowd, with fans standing, chanting and dancing much of the second half.

Notes: It was the Spurs’ 12th win by 15 or more points, most ever in a postseason. The Spurs outscored opponents by 214 points in the postseason. … Miami had won 11 straight series, tied for the fifth-longest streak in NBA history.

Reds blow the roof off with 13-4 rout of Brewers

MILWAUKEE (AP) — The Miller Park roof was open and the wind was blowing out to center. With a home... read more