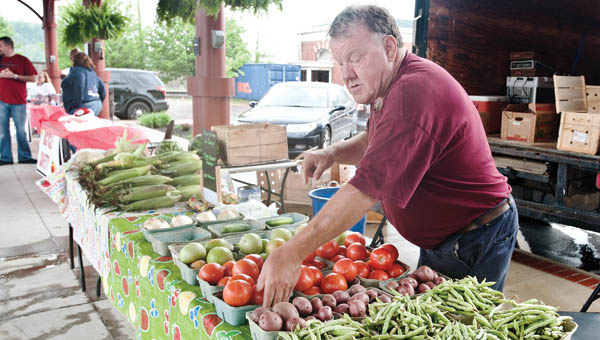 Tom Copley is one of many vendors at the local Ironton Farmers Market.

The official opening of the Farmers Market brought out a variety of vendors selling everything from green beans to crocheted hats to baked goods.

Under the specially constructed roof for the market on South Second Street farmers and vendors stayed dry during a rainy Saturday.

“Can you imagine what it would be like if we didn’t have this,” Becky Wiseman of Pedro, asked.

This was Wiseman’s second year to participate in the market with her sweet breads, jams and candies. By 10 a.m. she had already sold all of her maple cream candy.

The harsh and long winter along with a rainy spring has had many wondering if local fresh produce will be late this year.

“My strawberries are starting,” Wiseman said, predicting they will be available for harvest by the end of May or early June.

“I’ve already got a bit of lettuce,” she said.

This year Farmers Market organizers are planning more events to attract the crowds to the venue with a special festival each month celebrating a food in season.

Right now produce sold comes from the South. Besides the traditional beans, cucumbers and potatoes, the vendors were also selling vegetable plants.

Tami Hanshaw predicts the first local harvests will come in by the end of June or possibly early July.

“It will depend on the weather,” she said. “Whether there are hot days and cool nights.”

She is expecting to bring to market the same produce as last year, onions, potatoes, beets, tomatoes, garlic and corn.

This season she and her sister Cathy Knipp are planning to hold a monthly raffle during the market season. A buyer only needs to purchase one item for his or her name to be placed in a drawing to receive $15 worth of produce.

The Farmers Market runs Fridays and Saturdays from 7 a.m. until 3 p.m. Next week because of the Gus Macker 3 on 3 tournament, the market will move to Park Avenue by the Elks Club.