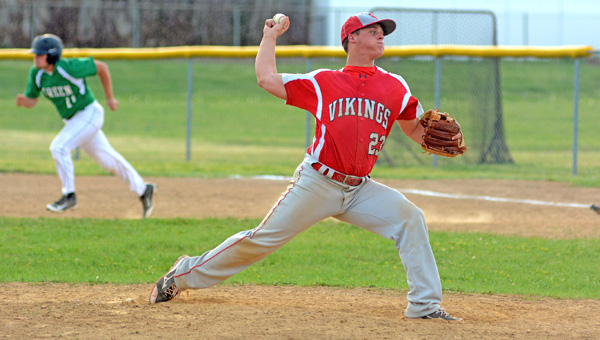 The Vikings played well and Mays was nearly unhittable in a 14-2 Southern Ohio Conference win Monday over the Green Bobcats.

Mays allowed just one hit in six innings as he racked up 15 strikeouts. He walked four and hit two.

Offensively, the Vikings had 15 hits led by Trent Thompson who went 3-4 and Seth Jarrell who was 3-5. Dillon McFann was 2-3 and Jacob Klaiber 2-5.

“We hit the ball really well tonight. We’ve been putting the ball in play the past week or two,” said Vikings’ coach Chad Renfroe.

“But the big difference was Tanner. He threw the ball really well.”

The Vikings took a 3-0 lead in the first inning on a double by Klaiber, an intentional walk to Mays and McFann’s three-run homer.

The lead went to 5-0 in the third when Mays and McFann walked and Jacob Easthom had a two-run single.

Thompson, Lane Wilson and Jarrell all singled for a run, Klaiber had a two-run single and McFann drove in a run on a fielder’s choice,

Harrell singled and Mays doubled for a run in the fifth.

Two hit batsmen and a base hit by Caleb Johnson gave Green two runs in the fifth inning.

The Vikings got a run back in the sixth when Thompson singled, moved up on a passed ball and Jarrell singled for a run in the sixth.

The final three runs scored in the seventh.

McFann singled, Easthom walked, they advanced on an error, Meadows singled in a run and Josh Dial had a two-run single.

PITTSBURGH (AP) — The Cincinnati Reds have seen enough of Ike Davis already in 2014 — and the season isn’t... read more