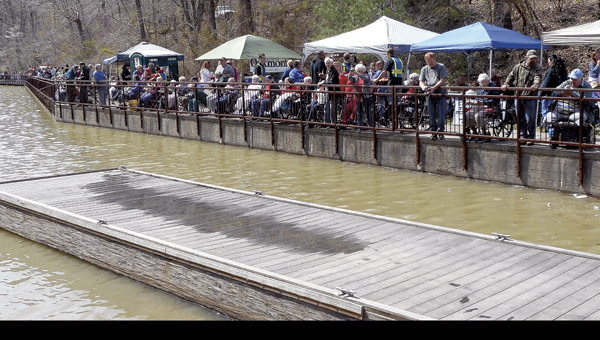 the tribune/brandon roberts
Fishermen gather along the boardwalk at Lake Vesuvius for the 11th annual Wheelin’ Sportsmen fishing event.

Organizers said the 11th annual Wheelin’ Sportsmen fishing event at Lake Vesuvius on Thursday was one of the largest in recent memory.

“This event was recognized a few years ago as the biggest or one of the biggest in the country,” Tim Slone, Ironton district ranger of the Wayne National Forest, said. “This is a very good turnout. It’s more than last year.”

Slone said nearly 300 people fished in 2013 and by scanning the boardwalk estimated at least 400 this year, which is something Slone attributed to the warm weather.

“It’s tough for people in wheelchairs to sit in the cold,” he said.

The event offers those in wheelchairs or who have difficulty walking a chance to spend a few hours fishing. Wayne National Forest partners with the National Wild Turkey Federation (NWTF) for the event.

Wheelin’ Sportsmen is for those restricted by age or disabilities and takes place along the Lake Vesuvius boardwalk, which allows for improved accessibility. Collins Career Center student Austin Runyon, 19, had caught one fish, a small bluegill, after nearly an hour of fishing. He said he threw the fish back instead of making the walk to do the required weigh-in. But goodwill and secret bait kept him from growing frustrated.

“A guy gave me some ham hock,” he said. “It won’t be long before they start biting a lot. And I’ve been helping the kids from Rock Hill bait their hooks. I’m just trying to be a good sportsman. I go fishing whenever I can.”

Runyon’s friend and classmate Sammy Warboy had not had luck similar to his friend’s.

“I haven’t caught anything yet,” he said. “I think it’s because I’m using these mill worms.”

The Ohio Department of Natural Resources Division of Wildlife released approximately 1,000 rainbow trout at 10:30 a.m. Slone said the other fish in the lake procreate naturally, but not the trout, which is the reason for the release.

A lot of volunteers are needed to making this event happen.

Nearly a dozen volunteer groups were represented at the event and were busy distributing free hot dogs to participants.

Lawrence County Commissioner Bill Pratt declared Lawrence County Wheelin’ Sportsmen Day and Boy Scout Troop No. 115 presented the American Flag and led the crowd in the Pledge of Allegiance prior to the event.

Hundreds turn out for egg hunt

An estimated 250 children ranging in age from newborn to 12-years-old were in attendance at the annual Easter egg hunt... read more