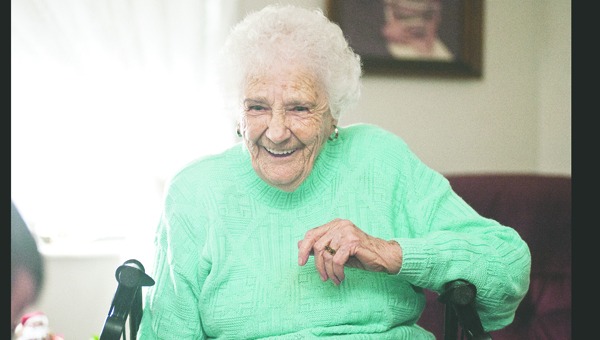 A century is a period of 100 years, a span of time that is sure to be marked by several watershed moments.

A century is usually broken down by decades and generations so that individuals can look back and examine that time period in a more easily understood period of years. However, on rare occasions people experience an entire century firsthand without the need to look back at it through the prism of historical text.

Lawrence County native Mona Brammer is one of those people. The 99-year-old is approaching her 100th birthday and says that she can clearly remember a bygone era as if it were yesterday.

“I remember being a little girl,” Brammer said. “Things were a lot different then. Cars were around but most people still used horses and buggies. I didn’t have electric until I was in my late 20s, and the furnaces in the area were still booming.

So much has changed and to me it feels like it’s changed fast. I remember having to go down to the river and pay a dime to get on a paddle boat, and that’s how people got to Ashland because we didn’t even have a bridge.”

Brammer has been alive to see the invention of stainless steel, microwaves, helicopters, atomic bombs and TVs, says that the advances in technology have been the biggest adjustments she’s made.

“I’ve seen so many new things invented,” Brammer said. “Things young people think have been around forever. Some of them took a while to get used to.”

Despite the fact that she’ll turn 100 on Jan. 4, Brammer’s health is good. She’s maintained her own apartment at the Sherman Thompson Towers on North Third Street for the past three years.

“Other than being a little slower moving, and a little hard of hearing I feel great,” she said. “Lots of people need help to keep their apartment clean or do their other household chores, I haven’t needed to ask for any help like that yet.”

Brammer has two children, a son who lives in Tennessee and a daughter who lives in Columbus. Both children have tried to convince their mother to leave the towers and move in with them. Brammer has repeatedly declined.

“They’re always trying to get me to move in with them,” Brammer said. “But my friends and my church are here in Ironton and I don’t want to go anywhere.”

She may not move but Brammer will go spend the Christmas holidays with her daughter, Geneva, before heading to Tennessee to spend some time with her son, Emmitt.

“I’ll go spend time with Geneva and then I’ll spend a while with Emmitt before I come back here,” Brammer said. “I talk to them both every day and they come and visit me a lot, too. They’re a big reason I’ve made it as long as I have. I love my children.”

As for other reasons for her longevity Brammer simply credits hard work.

While Brammer doesn’t turn 100 for another couple of weeks she will be celebrating her centennial date in just a few days, with a party at Sherman Thompson Towers on Saturday.

“My daughter is throwing me a party on the 21st before we head to Columbus for Christmas,” Brammer said. “She’s really gone all out for this party. I think she’s more excited than me.”

A Lawrence County grand jury this week handed up an indictment on an Ironton man accused of trafficking drugs through... read more