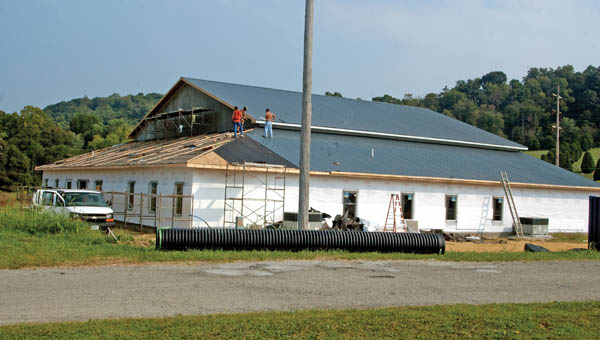 SOUTH POINT — Six years ago some Lawrence Countians had the vision to start a new church.

“It came out of the heart of seeing a large group of people who weren’t involved in church and were trying to start a church in the Tri-State for people who haven’t connected with other churches in the area,” Jimmy Lemon, staff pastor of Cross Community Church, said.

They started out worshipping in the basement of another church.

“Then we met in the Country Hearth Inn banquet room for a little while and then moved over to an old church in front of the Casa Grande,” Lemon said.

Now Cross Community, known familiarly as 3C, celebrates its sixth anniversary on Sunday and the prospect of a home of its own next year.

On acreage off Delta Lane, the church is building a 9,600-square-foot building that should be ready by early 2014.

The wood-frame structure was designed and is being constructed by Architectural Innovations of Catlettsburg, Ky. It will feature an auditorium that can seat 265 with five Sunday school classrooms.

The church offers two identical services each Sunday at 9:30 a.m. and 11 a.m. with a children’s and teen ministry during the service. On Wednesday evenings is a Bible study and dinner where groups discuss the message of the sermon given on the previous Sunday.

“We have several outreaches,” Lemon said. “One of the first one is Free For Fall, which is basically a big free rummage sale and we feed people. We try to do a lot of community outreach to be active in our community.”

Lemon says every age group is well-represented in the congregation from families with young children to those who are older.

“We have looked at these six years of the church as a kind of foundation developing the identity that we want to be,” he said, “to relentlessly be reaching out to the community to help see God in their lives.”

SOUTH POINT — Exploring funding options to supply water to residents of Macedonia Road hill is the next step in... read more