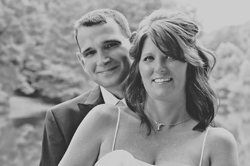 Best man was Austin Hammonds, son of the groom. Groomsmen were Luke and Clay Ferguson, sons of the bride.

The bride carried orange and ivory lilies. The bouquet stem was wrapped in the bride’s grandmother’s scarf and was pinned with a brooch that belonged to the groom’s grandmother. The bride wore a spaghetti strap knee length ivory dress with a pearled and beaded waistline.

The bride is the daughter of Judy and Ralph Waddle of South Point and Norma and Rick Martin of Ironton. She is the granddaughter of the late Robert and Bessie White-Brammer and Gerry Mowery-Martin and the late Ed Martin. She is a graduate of Ohio University with at bachelor’s degree in elementary education and a master’s in educational leadership. The bride is a third grade teacher at Cannonsburg Elementary School.

The couple will reside in Ironton with their seven children.