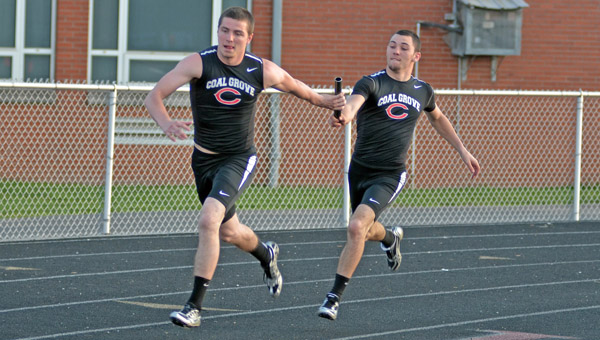 COAL GROVE — Bryan Steele is no Superman, but the comic book figure could be his role model.

During the Ohio Valley Conference football preview last August, the Coal Grove Hornets’ senior running back suffered a knee injury. It turned out to be a tear of his ACL and required surgery.

Steele underwent surgery on Sept. 25. His hopes of a great senior season were gone. And since ACL injuries usually take up to a year of recovery time, it appeared that Steele’s high school athletic career was over as well.

But Bryan Steele wasn’t about to be a normal recovery patient.

“It tore me up because it was my senior year and I didn’t expect anything like this to happen, especially the first scrimmage,” said Steele.

“I honestly took it a lot better than what I thought I was going to. I just went in there worked as hard as I could and tried to get back as fast as I could.”

The 6-foot-2, 180-pounder returned quickly. He played the last couple of weeks of the basketball season in February. He has followed that with full participation this high school track season.

And not only has Steele participated in track, he has been one of the area’s top performers.

In the OVC track meet two weeks ago, Steele was third in the high jump at 6-feet, leaped 18-6 to take fourth in the long jump, and he had a 54.3-second time to place third in the 400-meter dash.

He also qualified for the Division III regional track meet in the high jump and as a member of the 4×100-meter relay team.

“He’s had a great track season considering he’s just six or seven months off ACL surgery,” said Hornets’ coach Jay Lucas. “He qualified to the regional meet in the 4-by-1, the 4-by-2, the 4-by-4 and the high jump. That’s pretty daggone good.”

Obviously, Lucas said Steele isn’t at 100 percent. Although he can’t leap a building in a single bound, last year the all-around athletic standout high jumped 6-6 and just missed 6-8 twice. His best jump this season is 6-4.

“They cut his hamstring. It takes a year to heal and regain its strength. This year speed-wise he’s right there, it’s just the lift,” said Lucas.

Steele agreed with his coach.

Steele agreed with his coach.

One of the aspects in the recovery process is that mental Kryptonite: the worry of getting injured again. Steele admitted there were some moments when he had concerns.

“Sometimes I feel like there’s things there that I’m scared of. One day I was doing the high jump and my leg buckled and I was like, ‘Oh no, here it is again.’ I just walked it off. Since about midway through the year I’ve felt pretty good about my knee. It felt like it’s pretty solid,” said Steele.

“God blessed Bryan with great athletic ability, but beyond that, He blessed Bryan with a great personality and a strong desire to excel. When Bryan got injured, he never complained or asked why, but he just realized that God was in control of his life,” said Lucas.

“I think Bryan handled his situation as well as any high school kid possibly could. He has fought and battled through the pain and has persevered. Some would have said it’s too hard or not worth it, but Bryan wanted to help his team and school be successful. He really enjoys competition.”

Before the injury, Steele was getting inquiries from numerous colleges including Bowling Green, Kent State and Illinois. The injury may have scared off some schools, but others have remained in contact.

Steele is expected to sign with the University of Charleston, an NCAA Division II program, and he is anxious to get back on the football field.

Although he was a running back for the Hornets, Steele was also used out of the backfield as a passing target. He is expected to play wide receiver for Charleston.

“I think Bryan will excel at the college level. He has good speed and strength and exceptional hands. You put that together with his drive to excel and you have a special football player and athlete,” said Lucas. “He’s as good as I’ve ever seen.”

Well, what else would you expect from Superman’s protégé.

PITTSBURGH (AP) — The Cincinnati Reds were in good position to sweep a three-game series from the Pittsburgh Pirates on... read more